As Massive Mission Bay Blaze Continues To Burn, Mayor Says Welding Might Be To Blame 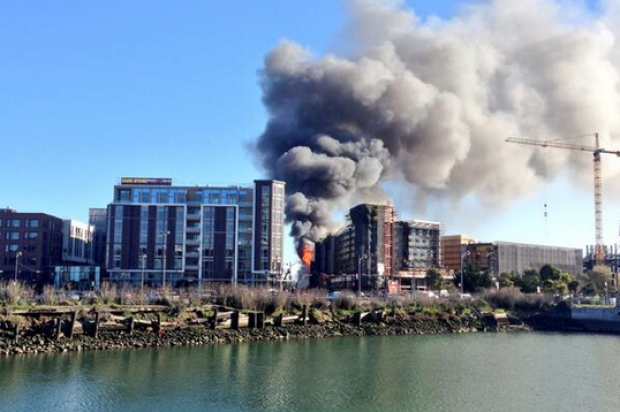 A five-alarm fire that destroyed an apartment building under construction in the city’s Mission Bay neighborhood on Tuesday is not yet under control this morning.

Firefighters are continuing to put water on the blaze, which burned at a construction site at Fourth and China Basin streets, but flames are no longer visible.

The neighborhood smells of smoke, and water is cascading down the sides of the gutted building and running onto Fourth Street.

San Francisco Mayor Ed Lee said at a news conference at the scene this morning that the cause of the fire remains under investigation, but noted that it started above ground.

“They were doing some welding, we don’t know what occurred there,” Lee said.

The building that burned was part of a development project by BRE Properties known as MB360. Company officials released a statement Tuesday saying that the building was known as Block 5, which contained 172 units under construction.

Lee identified the contractor as Suffolk Construction Co. He said a sprinkler system was being installed at the site but was not yet operational at the time the fire started.

The blaze was reported shortly before 5 p.m. and grew quickly, sending up a dark plume of smoke that could be seen from many parts of the Bay Area. Flames spread and engulfed the building, and there was initial concern that the blaze could spread to other structures.

Nearby apartments were evacuated, and heat from the flames shattered a number of windows of neighboring buildings.

“I think we’re very lucky that the fire didn’t jump any more,” the mayor said.

Lee said he sent a text message to Fire Chief Joanne Hayes-White when he saw embers from the fire floating over to a University of California at San Francisco building about a block away.

Hayes-White said, “He personally let me know that he saw a burning ember shift over to the UCSF property and we needed to take care of that.”

The ember ignited some landscaping on that building’s roof but the small blaze was quickly put out with the help of building maintenance crews, he said.

Lee said about 30 nearby residential units had to be evacuated, leaving those residents and their pets temporarily displaced.

He thanked city human services staff, animal control personnel, the American Red Cross and others for assisting those people.

The mayor said some residents are still displaced, in part because sprinkler systems at some apartment buildings were activated and the water was still coming out this morning.

“We’ll continue to make sure our departments and agencies are helping these residents out,” he said.

Fire Department spokeswoman Mindy Talmadge said the evacuated residents live at the Strata at Mission Bay apartments, and all have been able to find temporary housing on their own.

Lee noted that Tuesday’s firefighting efforts were facilitated by a high-pressure water system in Mission Bay that he helped push for when he was head of the Department of Public Works.

“But for that high-pressure water system, this fire would have been perhaps very hard to contain,” he said.

He said the fire could have been a lot worse if winds had been blowing in a different direction or if the structure had collapsed.

Hayes-White said about half of the city’s firefighters responded to the fire, and called their efforts a “phenomenal display of teamwork.”

She said one firefighter suffered burns to his face early on but continued battling the blaze, receiving treatment later for his injuries, which were minor.

“Our objective last night, which we were able to achieve, was to contain the fire to the building of origin,” she said.
Talmadge said a battalion chief also suffered a minor ankle injury.

The blaze has not yet been controlled, and Hayes-White said crews will be at the scene “as long as it takes” to put the fire out.

She said the fire department has been in touch with the developer, and that eventually heavy equipment will be brought in and the building will be dismantled.

Streets in the neighborhood remain closed this morning, and Talmadge said the area is considered a “collapse zone” because of the instability of the building.