Appealing TV: The Bachelor, Believe, and From Dusk Till Dawn: The Series 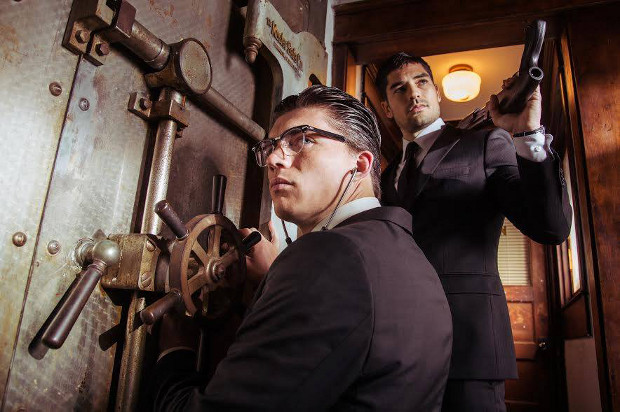 This is being written in advance of the True Detective finale, so from the past let me be the first to say, WOW OH MY GOD WHAT ARE YOU KIDDING ME. WHAT THE HELL WAS THAT? OH COME ON. Or? WOW THAT WAS AMAZING. Now that’s out of the way.

Monday, March 10
The Bachelor (8pm, ABC, season finale)
As demonstrated throughout this season, having a vague Spanish accent does not excuse one for being a complete dickhole when trying to find love on a reality show. How dare Juan Pablo Galavis sully the sacred institution of finding love on a reality show seen by millions of people?

Believe (10pm, NBC, series premiere)
On top of his Best Director shine for Gravity at last week’s Academy Awards, Alfonso Cuarón hops into the television pool with J.J. Abrams on shotgun. A powerhouse combination cannot go wrong, right? Well. It certainly isn’t winning me over with its rather pedestrian premise of guy protecting random white girl with powers nobody can fully understand and who controls the girl controls the world. Pretty sure “protect the white girl with supernatural powers” is one of the seven stories in the world. Delroy Lindo is also in it, and I liked him in The Chicago Code.

Believe’s regular time slot will be Sundays at 9pm, starting on Sunday, March 16.

Tuesday, March 11
24 Hours on Earth (9pm, BBC America, series premiere)
Prepare yourself for the BBC and BBC America to take on TIME (the concept, not the magazine), in another spectacular and majestically produced nature documentary. Time may be a flat circle, but in the reality of 24 Hours on Earth, it is a two-part mini series event, juxtaposing sweeping shots of lush shots of nature, putting that HD to work against the frame of everything taking place over the course of twenty-four hours. Because death created time in order to grow the things it will kill.

From Dusk Till Dawn: The Series (9pm, El Rey, series premiere)
The El Rey is the new network from Robert Rodriguez, which can be summed up as Grindhouse: The Channel. Or the Oprah Winfrey Network for folks who like schlocky action movies. Its launch centerpiece will be a television retelling of the 1996 action-horror classic, From Dusk Till Dawn, which is one of my favorite movies and the only horror movie I actually like.

I’ve grudgingly accepted that we live in the timeline where creativity is dead and things from the past can and will be rebooted, reimagined, and reinterpreted, but when the entire ten-episode run of From Dusk Till Dawn: The Series will take place over the course of one night you are telling me it will take ten hours for the series to tell the same story the two hour movie told. This is on top of no Salma Hayek strip tease dance, and no Cheech Marin telling you that “if you can find cheaper pussy anywhere else, fuck it” then, I’m sorry Robert Rodriguez, you were my hero in high school, and I still think the world of you, but much like Hall and Oates, I cannot go for that.

And hey international people, let Netflix save you the trouble of even looking for the El Rey network, as it will be distributing the series for those living outside of the US.

Wednesday, March 12
Men at Work (10pm, TBS, season finale)
The third season of the young twenty-something male at work sitcom (it’s not about the Australian band) ends its season with two back to back episodes.

Thursday, March 13
Hell’s Kitchen (8pm, FOX, season premiere)
Hell’s Kitchen isn’t so much a competition cooking show as it is an hour of censored, accented swears and beratement coming from one Gordon Ramsey to a murderer’s row of prison chefs and truck stop cooks with dreams of running a restaurant at a Native American casino.

A related aside: reading Anthony Bourdain’s Kitchen Confidential talked me out of dropping out of Laney College and enrolling in the Culinary Institute of America because I was too lazy to do algebra pre-reqs back in 2009. So, Mr. Bourdain will always have a place in my heart for that. Because while Hell’s Kitchen is played for gaudy schadenfreude, shoot, it isn’t that wrong.

Breaking Boston (10pm, A&E, series premiere)
Mark Wahlberg produces this reality show that focuses on working class twenty-something women trying to make it and turn their lives around in Boston, which I am sure is also its own character in the proceedings. Wahlberg hopes for the show to be an antithesis to a Jersey Shore or a Real Housewives, with sincerity and second chances after a couple of tough breaks in life. No word if the Dropkick Murphys are involved, as I imagine that nothing gets produced in Boston without them being featured on the soundtrack.

Friday, March 14
Vice (11pm, HBO, season premiere)
The news magazine show for people who smoke DMT returns to HBO for more engaging, brazen, and peanut butter and chocolate pieces about Afghani warlords who are super into the golden age of hip hop or kids in Pakistan who started an underground Pokemon league. Also something about North Korea. North Korea is to Vice as Uma Thurman’s feet are Quentin Tarantino.

Saturday, March 15
Black Sails (9pm, Starz, season finale)
The freshman pirate series (and prequel to the Robert Louis Stevenson’s Treasure Island!) Executive Produced by Michael Bay comes to a close and if you think I am going to come up with a pirate pun for that you are sorely mistaken.

Sunday, March 16
Total Divas (9pm, E!, season premiere)
Total Divas is a reality show that goes goes into the lives of WWE’s female wrestlers (Divas). The whole premise of the show gives me one of those existential belly aches, not unlike what True Detective wracked on my digestive system. As we are going behind the scenes of of those who work in a scripted reality of wrestling, and instead of being subjected to a documentary sense of reality, we get a produced and massaged supplemental second reality that is built on top of the edifice of what is concerned ‘real’ vis-à-vis the programing the WWE puts out (eg RAW). Where does the kayfabe (wrestling parlance for staged reality) end and the shoot (parlance for real) begin? I think I just gave myself a nose bleed.

Crisis (10pm, NBC, series premiere)
What is lightweight intriguing about Crisis (besides the fact it stars Gillian frakking Anderson) is that the pilot was produced in May of 2013 and there was a work stoppage in November to course correct subsequent episodes that veered too far away from the tone set in the pilot. Who knows, it may actually work in its favor and gussy up what seems to be a rote action-thriller about the kids of people in power being taken hostage.