Appealing TV: Dancing With The Stars, Da Vinci’s Demons, And The 100 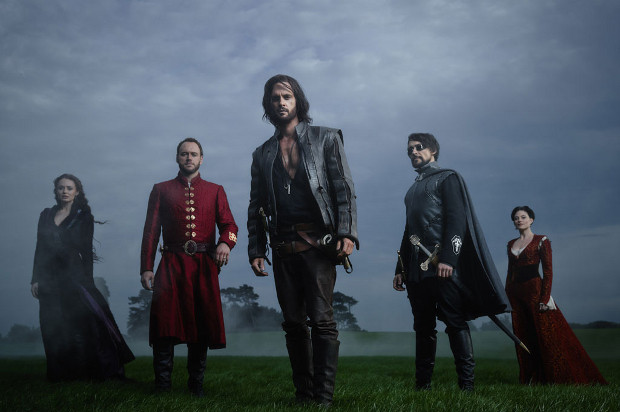 Santa Clara’s Latino Mix 105.7 playing Nelly’s ‘Hot in Herre’ on a loop this past weekend sounds like the inciting incident from an episode of The Adventures of Pete and Pete. Or maybe it’s a clue to the location of Malaysia Airlines Flight 370? Come on, True Detective turned the nation into a bunch of narrativizing, theory crafting Rust Cohles, why not connect the dots? I mean, ‘Hot in Herre’ is 3:49, and if you subtract that from 370, you get 21. Which is the product of 3 and 7, which is a prime number. And the sum of 2 and 1? 3. The Father, Son, the Holy Sprit. Also, how many alrights’s Matthew McConaughey is known for. Ergo, everything will be alright and the plane will be found. And I suppose that makes Matthew McConaughey out to be a Christ-like figure. Which I am perfectly okay with. And that only took me ten minutes and some basic arithmetic to do. The answers are all around us. But I digress.

Monday, March 17
Dancing With The Stars (8pm, ABC, season premiere)
If we don’t have the Bachelor to root for anymore, what else do we have to root for? Celebrities dancing ballroom to cover songs, obviously. This season’s crop of celebrities dancing to ballroom covers of pop songs include:

Also touted this season is the introduction of “The Switch Up” mechanic which gives audience members another illusion of control in a television democracy, by switching up what celebrity gets what partner. Playing god again, I see, ABC.

Tuesday, March 18
Barry’d Treasure (10pm, A&E, series premiere)
Of course this spinoff featuring breakout, eccentric, Barry Weiss from Storage Wars would be paired with the season premiere of Storage Wars (9pm, A&E, season premiere). In what is really just a sitcom in reality show’s clothing (as A&E has been tending to do), this show features Barry from Storage Wars (as I just call him) on a road trip looking for rare items, which is really just a vehicle for Barry to get weird and charming on camera.

Wednesday, March 19
The 100 (9pm, The CW, series premiere)
In reductive terms, the CW’s latest sexy teen sci-fi hour looks to be a mash-up of Battlestar Galactica’s post apocalyptic space opera with LOST’s stranded on an isolated place gimmick. Which, if we’re all being honest with each other, actually has my attention piqued. It also helps that Henry Ian Cusick (LOST’s Desmond) is in it. Juvenile delinquents are sent to recolonize the Earth after an apocalyptic nuclear holocaust 97 years prior. And of course it would be based on a YA novel. At worst, it would just be a sexier retelling of BBC’s 2010 show Outcast, sans (Battlestar’s) Jamie Bamber.

Doll & Em (10pm, HBO, series premiere)
The Newsroom’s Emily Mortimer plays a version of herself with real life best friend Dolly Wells as her personal assistant in this behind-the-scenes industry romp “The Industry.” And what Hollywood satire wouldn’t be complete without actors playing themselves? In this case, Doll & Em has Bradley Cooper, Susan Sarandon, John Cusack, Chloë Sevigny and Andy Garcia on deck.

Thursday, March 20
Party Down South (10pm, CMT, season finale)
The footage from Party Down South will be used as b-roll in news reports about the alcohol poisoning and/or DUI car crashes of its stars.

Friday, March 21
Whose Line is it Anyway? (8pm, The CW, season premiere)
The improvised comedy show was a welcome surprise, and returns with its original cast, and a great bevy of guest stars. Having America’s Crush ™ Aisha Tyler continue to take over the hosting duties from Drew Carey just stacks the deck.

Saturday, March 22
Da Vinci’s Demons (9pm, Starz, season premiere)
The trend of television shows ruining high school history classes continues with the second season of Starz’ Da Vinci’s Demons, featuring a Sexy Da Vinci ™ running around, solving conspiracies, pissing the Pope off. This season appears to largely be a MacGuffin chase in exotic South America as a way to shed light on the mystery of Da Vinci’s past, which is how to create a serialized hook in order to pitch a show about a sexy Leonardo Da Vinci that solves mysteries.

John Leguizamo’s Ghetto Klown (10pm, HBO)
I saw an earlier version of Ghetto Klown a couple of years ago at Berkeley Rep, and much like Leguizamo’s previous shows Freak and Sexaholix: A Love Story, it’s now coming to HBO. As a kid, watching John Leguizamo’s Freak and Sexaholix: A Love Story on our sorta legal HBO was life changing, and helped propel me down the path to writing and performing my own solo show. Leguizamo talks more about growing up and dishes on his life in Hollywood. Ghetto Klown is directed by actor Fisher Stevens (you know, the Indian guy from Short Circuit 1 and 2, and the bad guy in Hackers) who I initially confused with retired MMA fighter Spencer Fisher.