All Together: Ages and Ages Play Brick and Mortar 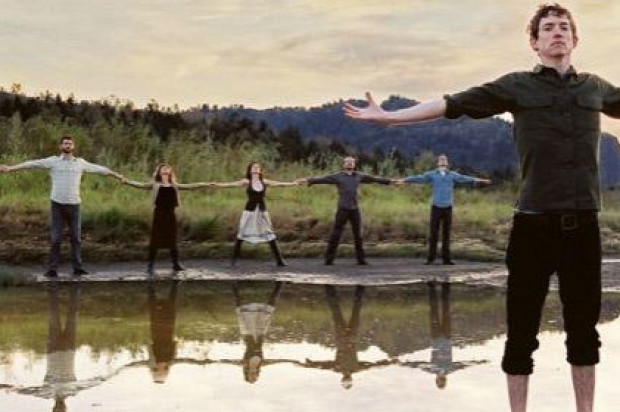 It may not look like it now that they’ve added spaces to their name, but Ages and Ages are a very unified band. In fact, adding spaces to change AgesandAges to Ages and Ages actually came about due to the band’s success as a cohesive unit. Since forming in Portland in 2009, the indie folk powerhouse has been catching the eyes and ears of everyone around them. Even the President took notice, hijacking the band’s “No Nostalgia” for a campaign playlist during the 2012 election.

Their latest endeavor tackles something far larger and more personal than Obama’s favorite tunes. Forthcoming album Divisionary is marked by contrast, “a hard-fought optimism that comes from processing some of these struggles,” frontman Tim Perry tells the Appeal.

“Everyone wants to feel free. Everyone wants to feel at peace. But is this really possible if you’re not willing to address the darkness too? ‘Divisionary,’ the word, is a reference to how personal growth and progress can sometimes go hand-in-hand with some sort of divide or separation. Because I think that the act of pursuing your vision of ‘right’ can often be upsetting to others and sometimes even yourself.”

The portmanteau came about when Ages and Ages could think of nothing equivalent and they’re hoping it catches on. The band actually went about trademarking the word, so for every mention of Divisionary, they’ve got a literal dime coming to them.

“I’ve made 30 cents in this interview alone,” Perry jokes. “It would take over 2 million listens on Spotify to make that kind of money!”

Gush all you want about their new album because from what’s been released, there is much to praise. This time around, Ages and Ages veer into the slightly more psychedelic, using their mass vocal power as more of a flourish than a focal point. The blending of percussion and jangled guitar on initial single “I See More” are an impressive gradient of harmony.

Divisionary is set to be released March 25th but folks aching to hear more from Ages and Ages need only wait until this evening, when they play Brick and Mortar. But don’t expect a particularly visually flashy show; Ages and Ages let their music stand in its purest form. “We prefer to focus on the sound, the harmonies, the intricate percussion, etc. I think I’d choose an earnest, heart-felt delivery over pyrotechnics any day and I think that’s what makes for the most interesting show too,” Perry says.