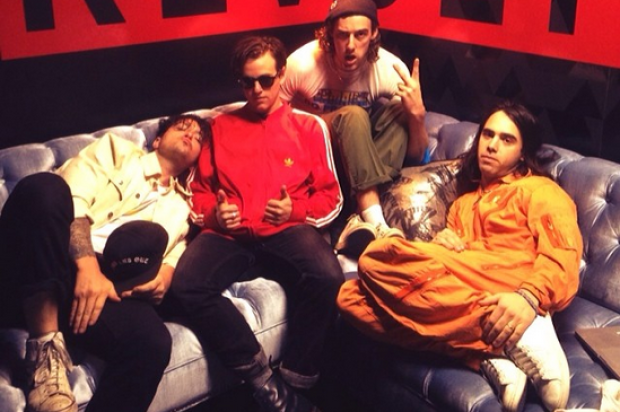 A lot can be said for a band name that tells a bit of a story. The current state of musical monikers has prompted an annual AV Club list of the worst, as well as some seriously un-google-friendly choices that make finding your new favorite album damn near impossible. NYC quartet SKATERS does a good job of staying visible and has a work ethic that nearly rivals their commitment to their music.

The band just returned from SXSW where, like the over 2,000 bands in Austin, they played many, many shows. Unlike most groups willing to do anything and everything to a point of an almost mindless response, SKATERS took back the power and made the most of a festival that’s quickly evolved past its original intentions.

“SXSW has become a different thing. There are more bands that I like going but it feels way fratty and just doesn’t feel nerdy,” drummer Noah Rubin tells the Appeal. “I love being nerdy and I’d say we’re a nerdy band. We try not to come across as nerdy but it’s still there.”

Rubin’s immediate example as we continue the interview is guitarist Josh Hubbard’s multitasking skills as he kicks a soccer ball in a parking lot while reading Kant. The band isn’t much for philosophy, Rubin says, but soon jokes about hedonism and drugs as a trend in an almost absurdist manner. Their songs straddle a fine border of self-awareness and heft, making new record Manhattan an impressive leap from earlier works.

Recent single “Miss Teen Massachusetts” is surprisingly reflective, with a video made all the more powerful by director Danilo Parra’s nuance. Parra also directed the video for SKATERS’ “Armed”, a percussive track set against the haze of hedonism itself.

Soon Rubin joins Hubbard in what’s quickly become a SKATERS touring past time. “When we’re stopped somewhere we pull out our skateboards and soccer ball. We try to stay active,” Rubin says. The commitment to staying active has made for some interesting stories and encounters along their tour as they make their way towards SF for the first time, where they’ll be playing at Bottom of the Hill tonight.

“I lost my last skateboard on tour and we went to a skate shop. The shop knew we were a band but we didn’t really want them to ask us what our band was called. We made it through the purchase and out the store and were so relieved, thinking we’re all good and right as we’re getting into the van,” Rubin says with a laugh, “and they come out and ask, ‘what’s your band called?’ And we tell them, ‘Skaters’ and they’re like, ‘really?'”