Plotwise, we once again have Liam Neeson fighting against the clock to save a bunch of people, this time from some maniac who threatens to kill passengers on a plane one by one unless a shitload of money is wired into one of those handy Offshore Bank Accounts for Super Villains. Julianne Moore co-stars, and that pretty much means she turns out the be the bad guy, right? I can’t be the only one who thought that the minute they saw that trailer. 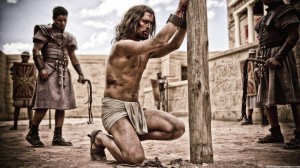 Portuguese actor Diogo Morgado’s official entry into the Dolores Park Easter Sunday Hunky Jesus contest comes to us a tad early, but that just gives you plenty of time to check it out and then give up carbs for Lent come Wednesday, so you can give this sexy messiah some stiff competition.

If an epic Russian movie about the World War II Battle of Stalingrad sounds like a bit of a snore, don’t worry! It’s in IMAX 3D, so it will be way too big and loud to sleep through.