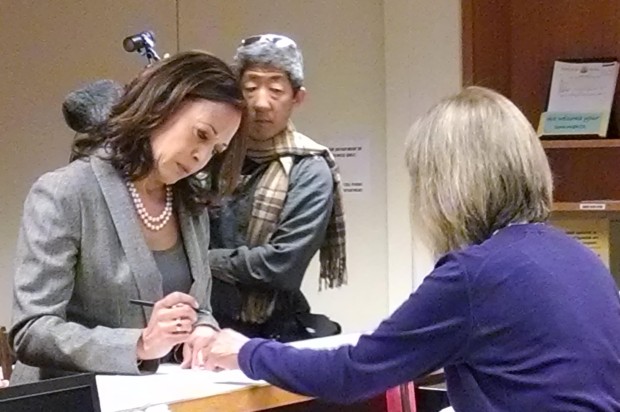 Harris, who is the first woman to hold the post of attorney general in California as well as the first African American and South Asian, is so far running unopposed.

“So far, so good,” she said outside San Francisco’s Department of Elections today. “The deadline is March 7, so we’ll see.”

As of Jan. 31, Harris had reported more than $3.1 million in campaign funds — $2.5 million of which was raised in 2013, according to the California Secretary of State’s office.

Harris said her strong fundraising totals reflect that people support the work she has done over the past four years.

She said she could not comment on measures that could appear on the ballot this year that would decriminalize recreational marijuana use because her office is required to write summaries for the ballot initiatives.

11:06 AM: California Attorney General Kamala Harris is announcing her run for re-election this morning at San Francisco City Hall.

Harris, who is completing her first full term, is the first woman, first African American and first South Asian to hold the office of state attorney general.

Harris is taking out papers to run at 11 a.m. today at the San Francisco Department of Elections.