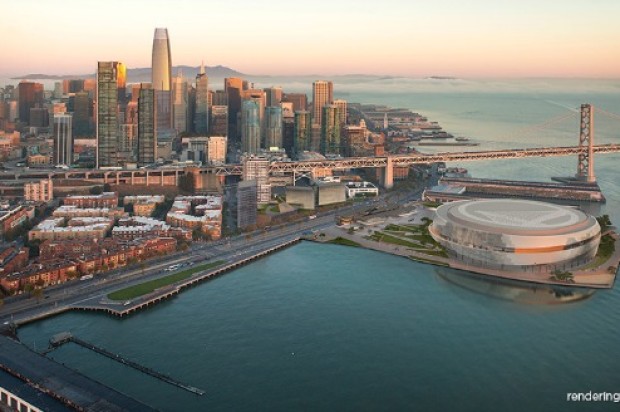 The Golden State Warriors’ plans to build an arena on the San Francisco waterfront by 2017 are being pushed back by at least a year, project organizers said today.

At the same time, proponents of a ballot measure that could impact the arena plan by imposing tighter restrictions on waterfront development will submit signatures to the city’s Department of Elections today to put the measure on the June ballot.

The Warriors in 2012 announced plans to move from their current home at Oakland’s Oracle Arena to an 18,000-seat arena at Piers 30-32 between the Bay Bridge and AT&T Park in San Francisco.

The plan was to open the arena by 2017, but based on input from community members, the design for the arena was overhauled twice, which pushed back the project’s schedule to allow for state-mandated environmental review, arena spokesman Nathan Ballard said today.

“It’s difficult to build an arena over the water where we’re replacing two crumbling piers that are dilapidated and falling into the Bay,” he said. “We never said this was going to be easy.”

The ballot measure could be another complicating factor.

The initiative would require any proposed height limit increases along San Francisco’s waterfront to be approved by the city’s voters.

Jim Stearns, a spokesman for the ballot campaign, said organizers have gathered more than 20,000 signatures—more than double the number required by the city to put the proposal on the ballot.

“There’s been a disconnect between City Hall and the voters about waterfront height limits,” Stearns said. “We’re confident the voters want to have a say in what is developed there.”

He said the measure “is not aimed at any one proposal” such as the arena, and noted that other plans for the waterfront include buildings that far exceed the arena’s proposed height.

Ballard said the arena project organizers don’t have a position yet on the ballot measure.

“We’re waiting to see if it qualifies, and if so, what implications it might have for our project,” he said.

A meeting on the arena plan is scheduled for 6 p.m. today by the Piers 30-32 citizens advisory committee.

The meeting, which will take place at Pier 1 along The Embarcadero, will provide community members with the latest updates on the arena project’s schedule and approval status.