BART Police Chief Addresses Disturbing Taser Video: “The officer had to use force to conclude the situation” 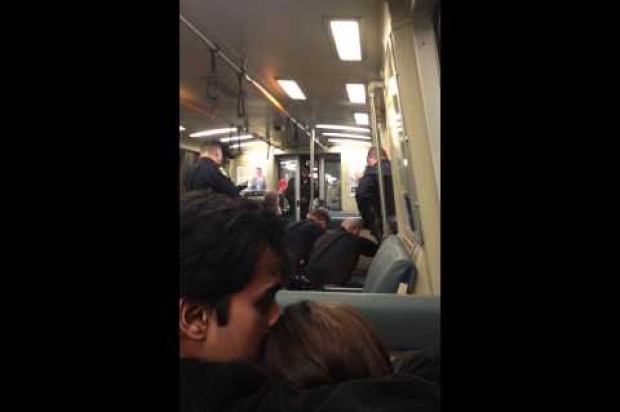 A Youtube video surfaced today of a BART police officer shocking an apparently drunken rider with a Taser and the footage has prompted a police investigation into whether the action was appropriate.

At the BART board of directors meeting this morning, BART police Chief Kenton Rainey addressed the video and incident, which occurred on Jan. 29 on a Millbrae-bound train.

According to BART police, an officer responded to a report around 10 p.m. that night of a man who was drunk and harassing passengers.

Police said the man, identified as Robert Asberry, allegedly became resistant on the train and a Taser had to be used to take him into custody.

Police said Asberry had an outstanding no-bail arrest warrant for a parole violation.

After he was stunned, Asberry was taken to Mills-Peninsula Hospital in Burlingame and was then booked for the warrant, resisting arrest, and for public intoxication, according to police.

The train was held for 18 minutes during the incident.

Rainey said to reporters today that the officers decided to use force on Asberry after he would not follow police orders.

“We always try to get individuals to voluntarily comply first. The officer had to use force to conclude the situation,” Rainey said.

The video resurfaced today after it was posted on Medium last month. In that post, a woman who was on the train with Asberry wrote about how she found the police action heavy-handed and unnecessary.

She wrote in the original post that she did not feel threatened by the suspect after he sat next to her.

“I was never concerned about my safety,” she wrote. “If I really felt worried, I would have moved, or I could have indicated my discomfort by at the very least moving my backpack and phone away from him.”

Rainey said police were informed about Asberry before he got on train and that there is more to the situation than what is shown in the Youtube video.

“Just because the witnesses we see in the video said nothing was going on, doesn’t mean the officer needs to disregard what is going on,” Rainey said.

“More important, and I don’t want people to lose sight, often times people engaged in this behavior, a lot of times there is a lot more to just what we see when the officer shows up,” he continued.

He said reports had come in about Asberry on a train platform.

According to Rainey, the officer involved is still on duty. Any decisions about taking him off duty or ordering a retraining on Taser use would come about after an investigation into the incident concludes.

The video of the incident can be viewed below.