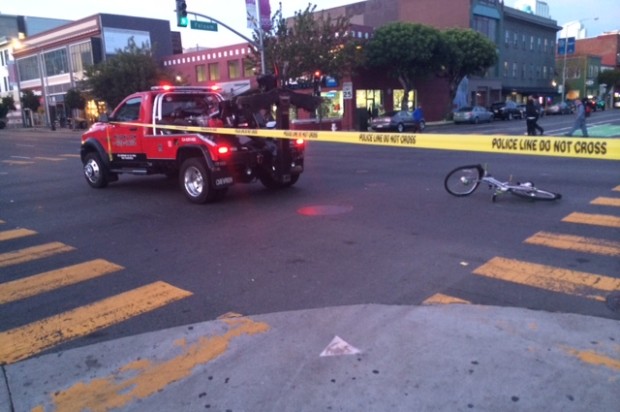 A bicyclist who was hit by a tow truck in San Francisco’s South of Market neighborhood on Wednesday evening was apparently traveling the wrong way on Folsom Street, a police spokesman said today.

The cyclist, a woman believed to be about 40 years old, was struck at about 5 p.m. Wednesday at Seventh and Folsom streets, police said.

She was apparently traveling west on Folsom Street, which is one-way in the other direction along that stretch, police spokesman Officer Albie Esparza said.

The woman was taken to a hospital to be treated for lacerations, possible broken bones and a concussion, Esparza said. Her injuries are not considered life-threatening.

The driver of the tow truck stopped at the scene and cooperated with police.

Leah Zagreus, a friend of the cyclist, said the victim was on her way to meet Zagreus at a nearby cafe when the accident happened.

Lee said the truck’s tire nearly ran over the victim.

“She was very lucky, she was only a few centimeters out of the way of the tire,” he said. “We were so worried.”

Esparza said police are continuing to investigate the case and are looking to see if surveillance cameras from nearby businesses captured the collision.

The collision comes after San Francisco recently made bicycle improvements on Folsom Street, including adding a green bike lane.

A campaign for safety improvements to the street was launched after 24-year-old Amelie Le Moullac was struck and killed by a truck on Aug. 14 at Folsom and Sixth streets, a block away from the site of Wednesday’s collision.