Despite Protests, SFMTA Board Approves Proposal To Allow Tech Buses To Use Muni Stops For $1 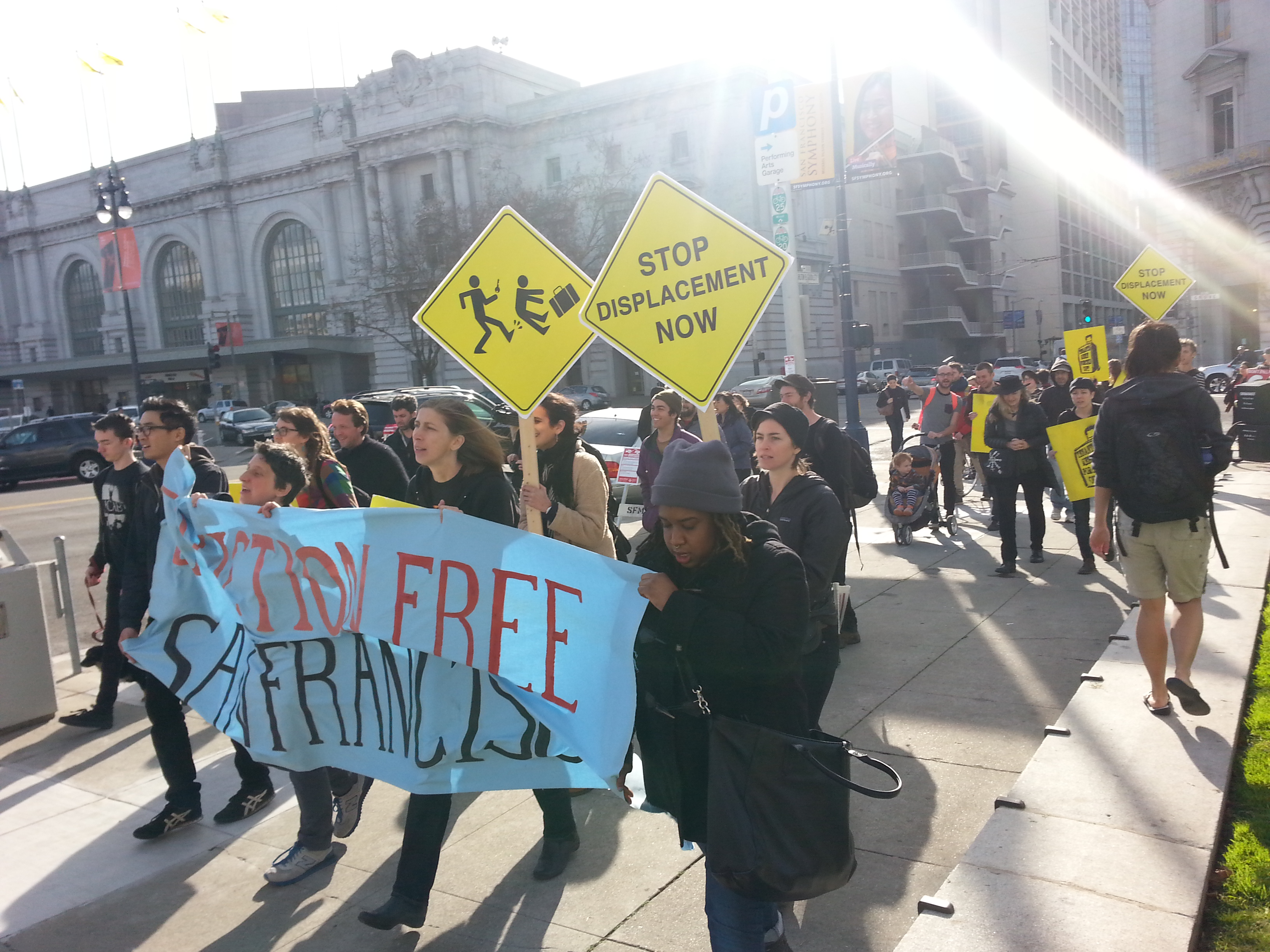 A proposal to allow private commuter buses to use certain public bus stops in exchange for a fee was approved today by the San Francisco Municipal Transportation Agency’s board of directors despite protests by housing rights advocates and other opponents.

The 18-month pilot program, approved in a 5-0 vote by the SFMTA board, is set to start in July. Companies such as Google and Facebook that use shuttles to transport their employees to work will be charged $1 per stop to use Muni stops. The same fee will apply to local hospitals and universities that also offer shuttles.

But the proposal has come under fire by protesters who say the buses symbolize the gentrification of San Francisco and the city’s rising cost of living due to an influx of wealthy tech workers. They also say the shuttles cause Muni delays. 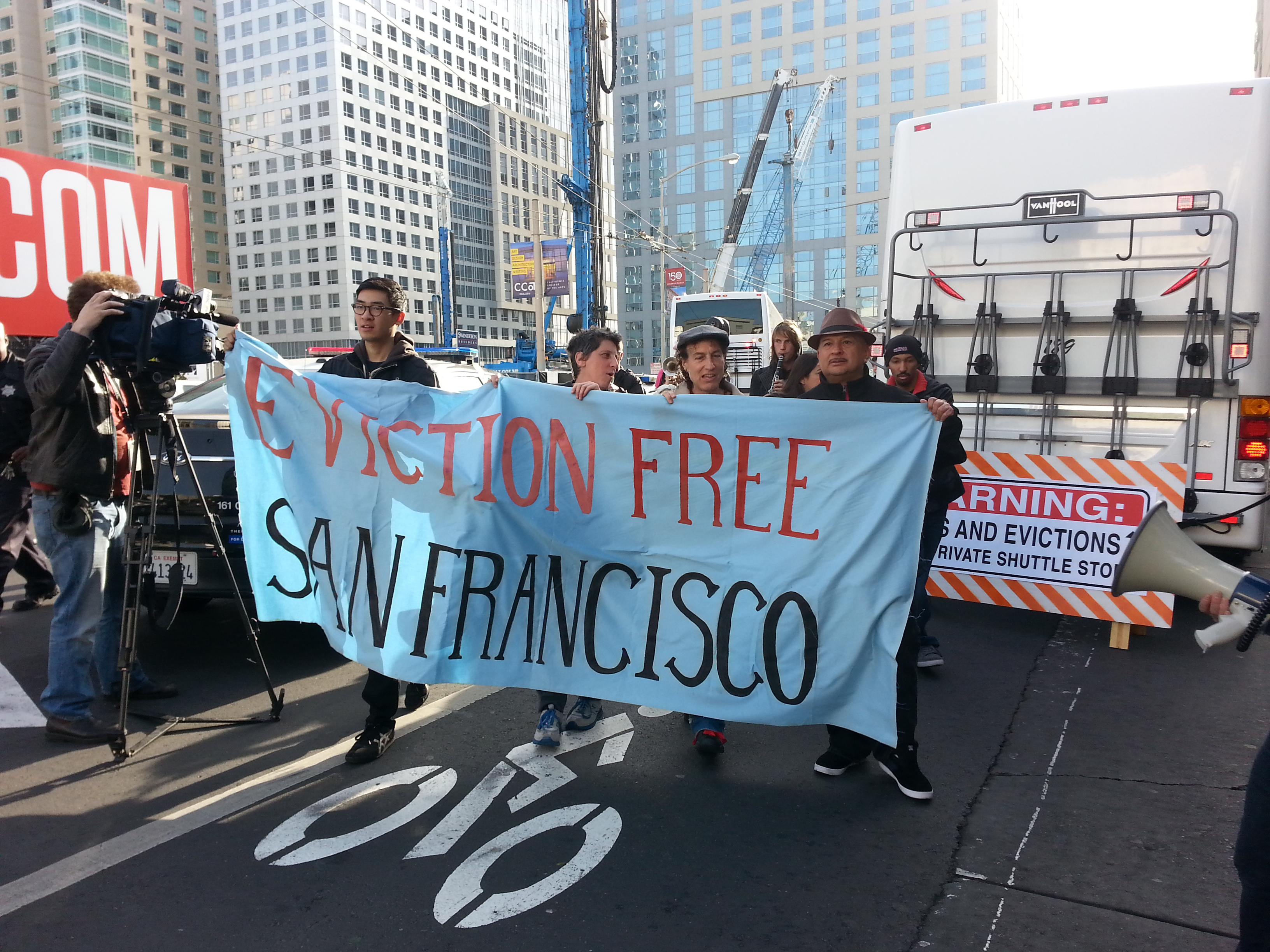 A group of several dozen protesters blocked two buses along Market Street this morning, then marched to the offices of the San Francisco Association of Realtors and City Hall.

Anabelle Bolanos, a City College of San Francisco student, told the board that the city should charge more for the buses.

SFMTA officials noted that under California’s Proposition 218, the city can’t charge the shuttle providers more than the total costs incurred by the city related to the buses.

The city’s projected costs include studying the effects of the shuttle buses, enforcing the rules that apply to the shuttles and providing extra parking enforcement officers near shuttle stops during commute hours.

The city’s price tag is projected to be roughly $1.5 million over the 18 months of the pilot program.

Employees at Google and other tech companies attended today’s meeting and said they support the plan.

“To us, it’s not a luxury shuttle, it’s just a thing on wheels that gets us to work,” said Dima Voytenko, an engineer with Google.
Voytenko said he was “a little surprised and upset” that his mode of transport has become such a hot-button issue.

Supervisor Scott Wiener came to the meeting and advocated for the proposal while also urging people not to scapegoat the shuttle buses for housing problems.

“Blaming tech employees is not the solution to our housing crisis,” Wiener said.

Wiener’s colleague, Supervisor David Campos, also attended the meeting and said he opposed the plan, arguing that it did not receive adequate public input before coming before the SFMTA board.

“I think this proposal exacerbates the problem and doesn’t solve it,” Campos said.

However, the SFMTA board ended up unanimously approving the plan.

“The pilot project is clearly better than the status quo,” said board chairman Tom Nolan.

The commuter buses will be able to stop at 200 of Muni’s 2,500-plus bus stops but will have to yield to Muni, pull to the front of the bus stop and follow other guidelines, SFMTA officials said.

4:42 PM: San Francisco Municipal Transportation Agency officials today addressed a recent spate of pedestrian and bicyclist deaths, saying they have to do more to improve safety on the city’s streets.

The SFMTA board of directors became the latest local agency to call for the elimination of all pedestrian and bicyclist deaths in the city, a policy safety advocates are calling “Vision Zero.”

Director Cheryl Brinkman asked SFMTA staff to develop a resolution in support of “Vision Zero,” saying the board plays “a major role in keeping people safe on the streets of San Francisco.”

SFMTA transportation director Ed Reiskin said the agency has taken steps to improve safety but “this past month reminds us of still how far we have to go.”

Reiskin said 21 pedestrians died in collisions with cars on city streets in 2013, including seven in December alone. Four bicyclists and nine car drivers also died during the year, he said.

“People shouldn’t be killed or seriously hurt just getting around our city,” he said. “Clearly there’s more work to be done.”

Supervisor Jane Kim, who joined two colleagues in introducing a resolution supporting “Vision Zero” at last week’s Board of Supervisors meeting, called on the SFMTA board to immediately implement temporary pilot programs to improve safety at intersections known as hotspots for collisions.

The San Francisco Bicycle Coalition, Walk San Francisco and other groups held a rally outside City Hall before today’s board meeting and echoed Kim’s sentiments.

Nicole Schneider, executive director of Walk SF, said the advocates are calling for an increase in the “three E’s”—engineering, education and enforcement.

She said the areas that most need re-engineering are the South of Market, Tenderloin and Chinatown neighborhoods, which “bear the brunt of freeway-type streets” and need safety improvements like curb bulb-outs at intersections and wider sidewalks.

Mayor Ed Lee has said the city is also launching a traffic safety awareness campaign next month and is developing a training program for drivers of large trucks and other vehicles going to and from construction sites around the city.