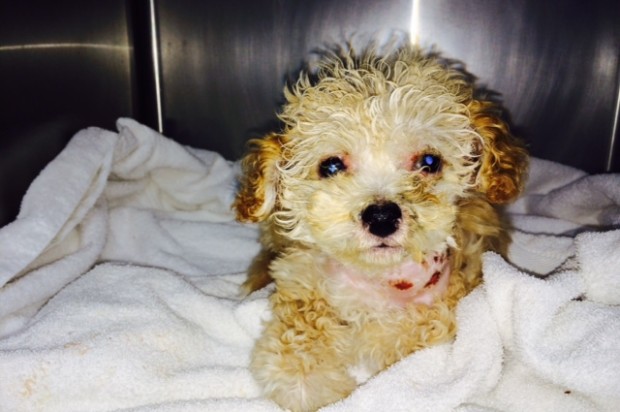 Two Recology employees who rescued an injured puppy from a recycling sorting conveyor belt last month will be honored by the Animal Control and Welfare Commission on Thursday, according to Animal Care and Control officials.

The 10-week-old puppy, an apricot-colored poodle nicknamed “Gem” who was apparently thrown away, remains in foster care receiving medical treatment, according to San Francisco Animal Care and Control spokeswoman Deb Campbell. But Campbell said she has “come a long way.”

“She looks great, she looks completely different now,” Campbell said today. “And she is so sweet.”

Gem, who will be available for adoption when she is fully recovered, will attend Thursday’s event honoring her rescuers, Campbell said. Hundreds of people have inquired about her adoption, officials said.

The two workers being honored this week spotted the puppy after she was unloaded onto a conveyor belt at a Recology dump in a truckload of bottles, cans and other recyclables on Dec. 20, Campbell said.

She was conscious and alert when she was found, with numerous bite marks around her neck, head and ears, according to Campbell. She was also suffering from lameness in her hind legs and had discharge in her eyes and ears.

Veterinarians believe the puppy suffered most of her injuries before being thrown away.

The workers will be honored Thursday at 5:30 pm at the Animal Control and Welfare Commission meeting in Room 408 at San Francisco City Hall.

Animal control officers released photos of Gem previous to her recovery are asking for the public’s help in finding out who owned her and how she ended up in a recycling truck.

Anyone with information is asked to contact San Francisco Animal Care and Control at (415) 554-9400.