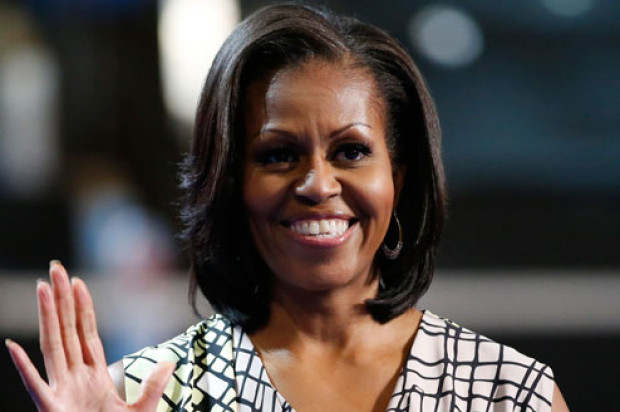 The first lady attended the Democratic Congressional Campaign Committee Women’s Lunch and VIP reception around 11:30 a.m. on the second and final day of her fundraising trip to San Francisco.

Waiting outside the hotel at 950 Mason St. were about a half-dozen protesters, many with the group Single Payer Now holding signs demanding universal health care.

Health care activist Joan Intrator, 86, of San Francisco, said she was there to send the message to the first lady and President Obama that there should be access to Medicare for all Americans.

Group organizer Don Bechler said the group was carrying signs outside the hotel today because Michelle Obama is a powerful woman who is able to raise hundreds of thousands of dollars for the Democratic Party in a single visit.

A lone Occupy San Francisco organizer was passing out fliers outside the hotel to encourage people to come to a protest and march this afternoon against the Trans-Pacific Partnership, a proposed trade agreement between 12 countries including the U.S., Japan, and Mexico.

The downtown march from Pelosi’s San Francisco office to Sen. Dianne Feinstein’s office is expected to begin at 4:30 p.m.

This morning’s DCCC event was sold out. According to an invitation on the DCCC’s website, tickets cost from $500 to $32,400 per person.

A guest at the Fairmont visiting from Delaware, who declined to give her name, said she had been waiting outside the hotel doors for most of the morning hoping to spot the first lady.

She had thought Obama would enter before 11:30 a.m. for the reception, but it appeared the first lady was already in the building before 11 a.m., to the woman’s disappointment.

Obama’s fundraising trip had initially been scheduled for October but was postponed because of the federal government shutdown.
Just before 12:30 p.m., Obama’s motorcade crossed Market Street at Eighth Street on the way to the airport.

On Thursday, the first lady attended two Democratic National Committee fundraising events in the city, a roundtable at a restaurant in Jackson Square and a reception in the Financial District.