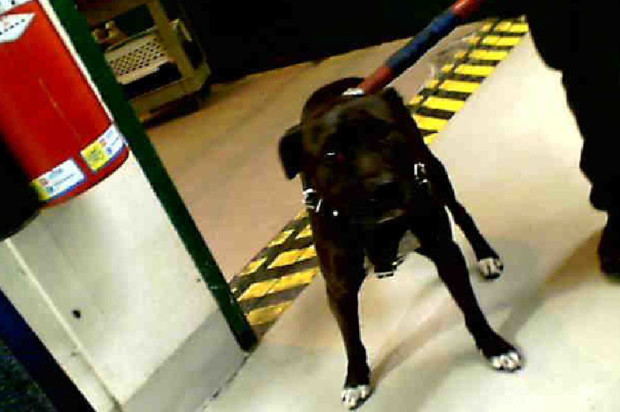 Police shot and killed a dog after it attacked and bit two men near Golden Gate Park in San Francisco late Tuesday night.

Officers responded to the area of 25th Avenue and Lincoln Way at about 10:30 p.m. after receiving reports that two dogs were attacking a man, police said.

The man was bitten several times by a black male pit bull mix named Frisco (picture above), according to SF Animal Care and Controlspokesperson Deb Campbell.

A person nearby attempted to help the man and was also bitten, according to police.

When officers arrived, they located Frisco and fatally shot him, police said. His body has been transported to the city shelter, Campbell said.

A second dog involved in the attack fled the scene, police said, but was found and leashed after an overnight search.

According to Campbell, the second dog is a large white female pit bull mix named Cleo (you can see her in the video below), who was found at a homeless encampment in Golden Gate Park a little after 8 AM.

Cleo remains in custody at San Francisco Animal Care and Control, where she will be held for a Vicious and Dangerous dog hearing, and for a mandatory ten day rabies observation.

According to Campbell, rabies has not been found in dogs in San Francisco for decades.

This wasn’t Frisco and Cleo’s first experience with the ACC. According to Campbell, Frisco was impounded at the ACC in December 2013 (when the picture above was taken), when a vehicle containing both dogs was towed.

Police said the man who suffered multiple dog bites was taken to a hospital and is in stable condition. The second victim was bit once in the leg but refused medical attention, police said.

Campbell said the owner of the dogs has been identified but said she did not know if he would be cited for Tuesday’s incident.

This is the second dog an SFPD officer has shot in recent days. On Saturday, a San Francisco police officer shot and killed a dog in Potrero Hill.

At about 10:30 a.m. Saturday, officers with the department’s housing unit were investigating a report of a squatter living with a dog named “Psycho” in a vacant unit in the 1000 block of Connecticut Street in the city’s Potrero Hill neighborhood.

The suspected squatter was outside the unit as officers were knocking on the door, then kicked open the door, allowing the dog to charge at the officers, police said.

An officer was backed against a wall and fell to the ground as the dog lunged at him, prompting him to shoot and kill the dog. The suspect was then placed under arrest on suspicion of aggravated assault on a police officer and trespassing, according to police.

In response to both cases, ACC Director Rebecca Katz said “It’s unfortunate that these incidents have a negative effect on pit bull adoptions. The breed can make wonderful, loving companions.”