Groups On Both Sides Of Abortion Debate Converge In San Francisco 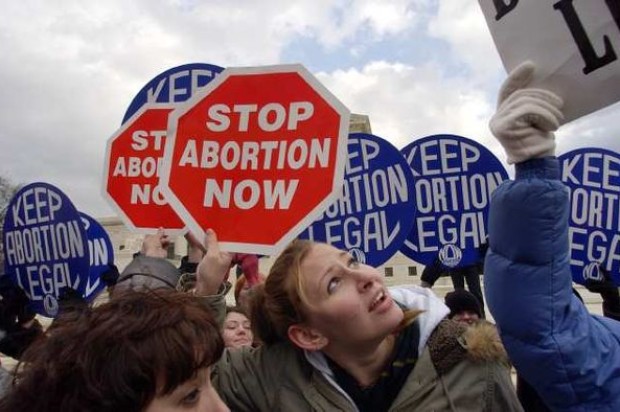 On the 41st anniversary of the landmark Roe v. Wade decision by the U.S. Supreme Court to legalize abortion, pro-choice groups are meeting in San Francisco today to mark the date and speak out against the upcoming anti-abortion Walk for Life West Coast march in the city.

The group Stop Patriarchy and others held a rally this morning at Powell and Market streets to call for “abortion on demand and without apology” and to denounce signs placed on Market Street by the anti-abortion activists that say “Abortion Hurts Women.”

The signs are “outrageous lies,” said Sam Rodya, an organizer with Stop Patriarchy. “Those banners are harmful and should not be out.”

A similar protest is planned at 4:30 p.m. at Fourth and Market streets by the group Women Organized to Resist & Defend in opposition to the signs.

On Saturday, the 10th annual Walk for Life West Coast anti-abortion march will take place in San Francisco, with a 12:30 p.m. rally at Civic Center Plaza followed by a walk down Market Street to Justin Herman Plaza.

Muntean defended the banners, saying event organizers went through proper city procedures for having them posted to advertise the march.

“We followed all the rules and regulations for the city,” she said. “The banners are up there to advertise our event and the fact that abortion hurts women.”

She said people will be speaking Saturday about the psychological and sometimes physical impacts that abortions can cause.
“It can’t possibly be said that abortion is a 100 percent safe procedure,” Muntean said.

Other rallies and events related to the Walk for Life are planned on Friday and Sunday. A full schedule of events can be found online at www.walkforlifewc.com.

Rodya said his group and other pro-choice advocates plan to hold a counter-protest at Powell and Market streets during the Walk for Life.