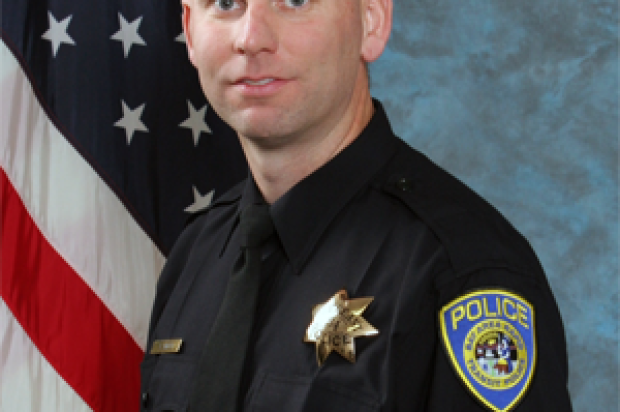 Rainey said Maes has 26 years of experience as an officer, the last 14 with BART and the prior 12 with the Moraga Police Department.

Smith, 42, a 23-year veteran at BART, was fatally shot while he, Maes and five other officers conducted a search of a robbery suspect’s apartment at 6450 Dougherty Road in Dublin at about 2 p.m. last Tuesday.

Rainey said Raes has an extensive background in criminal investigations and has received extra training in conducting searches and executing arrest warrants and has served as a BART field training officer, an acting sergeant and a rifle operator.

The chief said all BART police officers get training on using guns and in searching residences but mishaps can still happen.

Referring to the fatal shooting of Smith, Rainey said, “You can have all the training and experience in the world and something can still go wrong.”

He said, “Maes is a very experienced, well-trained officer but obviously something didn’t go the way we wanted it to go.”

Rainey said BART detectives were involved in conducting 18 probation searches last year but he doesn’t know if Smith or Maes participated in those searches.

Rainey said the reason why something went wrong during the probation search last week won’t be announced until the sheriff’s office completes its investigation, which he said won’t be for another three to four weeks. He said BART’s investigation won’t be finished for another 30 to 45 days.

Smith and Maes were among five plainclothes BART detectives who participated in the search along with two uniformed BART officers and one Dublin officer in uniform, according to Rainey.

He said BART’s policy requires that officers who are in uniform to turn on their lapel video cameras during searches but it’s optional for officers in street clothes to have and use such cameras.

Rainey said he can’t comment on reports that the BART uniformed officers who participated in the search didn’t use their video cameras because the matter is still under investigation.

He said if the investigation confirms those reports, “That would be very troubling for me but I would have to see the reason for them (the officers) not using them (the video cameras).”

He said that effective immediately, all planned residential searches and deliveries of warrants must have the written approval of the deputy chief for patrol operations or his designee before they are executed.

Previous policy called for a manager to be on scene during a search. That requirement will remain in place in addition to the new requirement, Rainey said.

In addition, Rainey said he is asking the U.S. Department of Justice to provide technical assistance in reviewing BART’s policies and procedures and training and the daily performance of its police personnel in all aspects of the use of force and use of force reporting and administering its body camera system.

He said BART also is asking the Department of Justice to review the constitutionality of its search procedures of persons and residences.