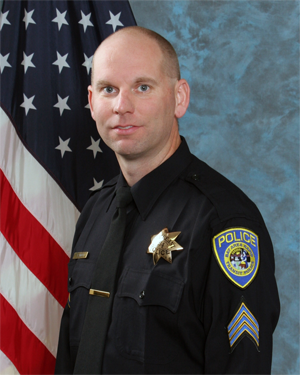 BART’s police chief confirmed today that the officer who died after he was accidentally shot by a colleague on Tuesday was Sgt. Tommy Smith (pictured right), a 23-year veteran of the department.

At a news conference at BART headquarters in Oakland this morning, Police Chief Kenton Rainey described Smith as a “great detective, husband, father and friend who touched many lives.”

Smith’s wife Kellie is the head of the BART Police Department’s K-9 unit, and the two have a 6-year-old daughter.
“Professionally and personally, he will be greatly missed,” Rainey said.

The shooting happened just before 2 p.m. at the Park Sierra Apartments at 6450 Dougherty Road in Dublin. Smith was taken to Eden Medical Center, where he died a short time later.

Smith and other officers were conducting a probation search at the one-bedroom apartment of 20-year-old John Henry Lee, who was arrested last Thursday after an early-morning car chase that began in San Leandro and ended in Oakland.

Lee, who police said was driving a car that had been stolen from a spot on BART property, is suspected in a series of recent BART-related robberies, authorities said.

Lee was still in custody when officers arrived at his apartment on Tuesday for the probation search, and the officers knew he wasn’t there, Rainey said. There were two BART officers in uniform, five plainclothes BART officers—including Smith—and an Alameda County sheriff’s deputy, Rainey said.

The door to the apartment was unlocked, which may have led the officers to believe there was someone else inside, Alameda County sheriff’s Sgt. J.D. Nelson said at today’s news conference.

Rainey declined to go into specifics about how the shooting happened, including whether the officers had their guns drawn, but did say that in general, officer do sometimes have their guns drawn when doing probation searches because “you never know what’s on the other side of the door.”

He said the officers were looking for a stolen laptop, a laptop bag and other related items that they believe Lee may have stolen.

Rainey said officers who conduct probation searches like Tuesday’s typically wear bulletproof vests, but he did not confirm that Smith was wearing one when he was shot.

He also declined to say whether the officers involved were wearing lapel cameras. He said that under the BART Police Department’s policy, lapel cameras are mandatory for uniformed officers and optional for plainclothes officers.

Nelson said the investigation is expected to take at least several weeks.

“The nuts and bolts of the investigation won’t come out today,” he said.

Nelson said investigators are still looking into the details of what happened, including how many shots were fired.
“We have a lot of work to do to put it together,” he said.

Rainey said he won’t release the name of the officer who shot Smith until next week.

“We want to give him a chance to grieve,” the chief said.

“I visited with him last night and he’s extremely upset, and we want to give him time to come to grips with what happened … I said we would get through this together,” Rainey said.

Rainey confirmed that Smith has two brothers who work in law enforcement in the Bay Area, and Nelson confirmed that one of those brothers is an Alameda County sheriff’s deputy.

Rainey said BART police officers receive 40 hours of safety training each year—even more than the 24 hours of training every two years that is required by state law.

The shooting marks the first on-duty death of a BART police officer in the agency’s history.