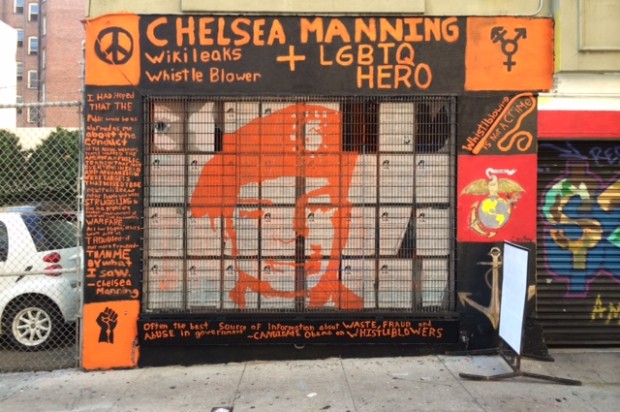 A new mural highlighting the problem of suicide among former soldiers was dedicated today in a San Francisco alleyway that is home to an ongoing art project for veterans.

The mural in Shannon Alley by Mark Pinto shows 22 paratroopers whose parachutes have been replaced by nooses, highlighting the fact that an estimated 22 veterans commit suicide each day in the U.S.

“People hear the statistics but kind of ignore them,” Pinto said.

“The graphics are something you can’t really ignore.”

He said he hoped the piece shows the “mental challenge of reintegration.”

“These veterans are hurting and aren’t getting the services they need,” said Pinto, a 20-year veteran of the U.S. Marine Corps as a helicopter pilot who served in the Gulf War and retired in 2002.

The mural is one of dozens painted in the alley, located near Geary and Taylor streets in the city’s Tenderloin neighborhood. 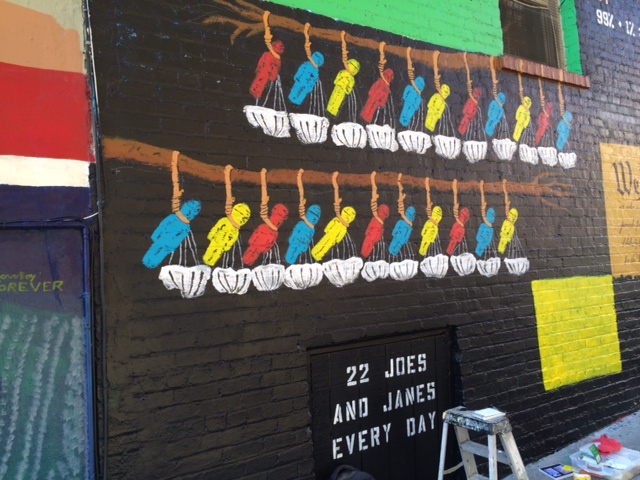 The project was started in 2011 by Amos Gregory, himself a veteran of the Gulf War era.

“It all started out of love” and has become “a beacon for so many vets,” said Gregory, who has also done projects with U.S. veterans in Puerto Rico and ones who have been deported to Mexico.

He said the project has given voice not just to the problem of suicide among veterans, but other military issues, including the plight of Bowe Bergdahl, a U.S. Army soldier who is currently a prisoner of war in Afghanistan.

Another mural highlights the case of Chelsea Manning, a former Army intelligence analyst who earlier this year was convicted on espionage charges for leaking classified information to the online group WikiLeaks and was sentenced to 35 years in prison.

More information about the project can be found online at www.sfvetsmural.org.