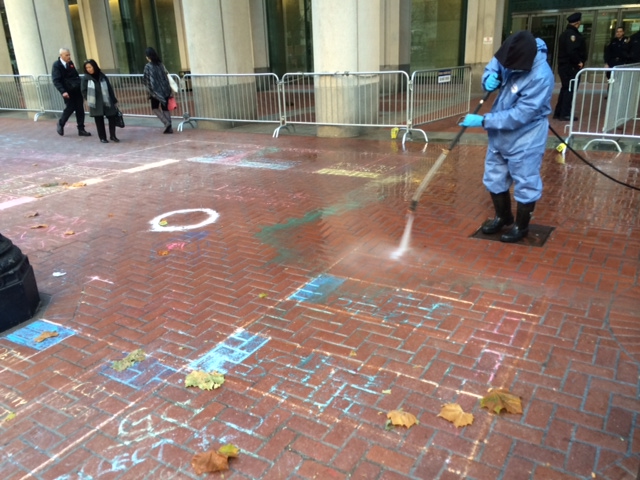 A group of protesters was peacefully removed after camping overnight outside the Federal Reserve Bank of San Francisco to mark the 100th anniversary of the federal agency’s creation.

Police began removing the group at about 7 a.m. from outside the building, located at 101 Market St., San Francisco police spokesman Officer Gordon Shyy said. There were no arrests made or citations issued, he said.

“Everyone left willingly,” he said.

The group, which included members of Occupy San Francisco, were criticizing the policies of the Federal Reserve, which was created exactly 100 years ago, on Dec. 23, 1913, and sets the nation’s monetary policy and helps regulate banking institutions.

Rick Flicek, a member of Occupy San Francisco, said, “They play funny with people’s loans” and “our money’s only worth what they tell us.”

Flicek said there should be more transparency in the workings of the Federal Reserve.

“We just want money to be out of a private bank that is federal in name only,” he said.

The group used chalk to draw a mock version of a Monopoly game board on the sidewalk in front of the building, but a Department of Public Works employee was hosing it off this morning.

Flicek said protesters plan to draw it again once the police and cleanup crews leave, and said more than 100 people are expected to come out for a 5 p.m. rally today at the same spot.