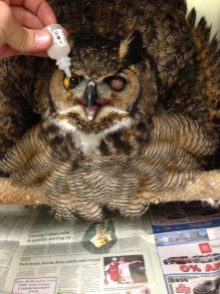 A one-eyed owl that was nursed back to health at the Peninsula Humane Society has been released into the habitat where it was found injured two months ago, Glen Canyon Park in San Francisco.

The adult Great Horned Owl had been receiving care at the PHS Wildlife Care Center in Burlingame since it was discovered grounded in a resident’s backyard in September, PHS spokesman Scott Delucchi said.

It was re-released Monday night in the 70-acre park, which contains a deep canyon, open hillsides and groves of oak and eucalyptus trees.

“We tried to release it as close as possible to where it was found,” Delucchi said.

When it was first brought into the care center, a veterinarian diagnosed the owl with an ulcer on one eye and hemorrhaging in both, causing them to fill up with blood, Delucchi said.

Over weeks of treatment by PHS/SPCA staff that included eye-drops (pictured above) and anti-inflammatories, the owl recovered normal vision in one of its eyes but was left permanently blinded in the other.

Fortunately for the owl, it doesn’t need both eyes to hunt or fly, Delucchi said.

Unlike humans, owls can perceive depth with just one eye, or “monocular vision,” he said. Owls can also turn their heads up to 270 degrees, making seeing with one eye a little easier.

Also, owls do not rely entirely on vision to hunt in the wild, according to the PHS. Most owls have asymmetrical ear sockets on either side of the head, allowing them to pinpoint the direction of sound and locate prey.

Before the one-eyed owl was released back into its habitat in Glen Canyon Park, PHS staff conducted a series of “hunting tests” to see if their patient would be likely to survive on its own, Delucchi said.

It easily passed the tests, he said.

The release represented another success story for the PHS Wildlife Care Center, which treats and releases around 1,400 injured or abandoned wild birds and animals every year.