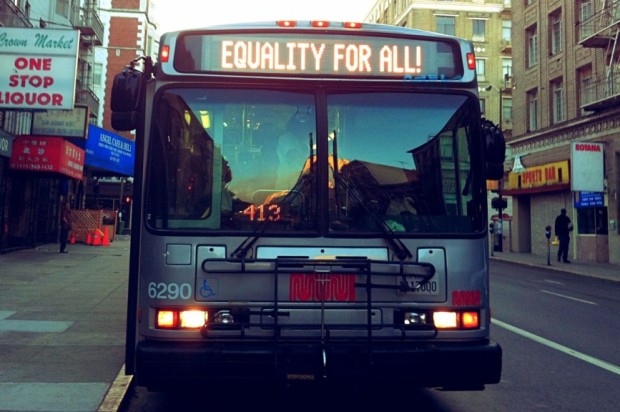 Muni’s venerable fleet of 1,100 vehicles will no longer display promotional messages such as “Go Giants Go” or “Equality for All,” according to SFMTA officials.

The transit agency’s decision to terminate the program is the apparent result of increasing complaints from riders — some of whom are developmentally disabled — claiming that the messages distract from reading Muni route information, officials said. “The straw that broke the camel’s back was a complaint from the disabled community,” said SFMTA Director Ed Reiskin.

Interrupting route information with scrolling phrases like “Go Niners” confuses people with developmental difficulties, and “often” prevents them from boarding — especially at stops which serve multiple routes, according to internal SFMTA emails obtained by The Appeal. Officials cited a specific example of a “highly functioning autistic client” who consistently missed buses because of the messages — and who has lodged numerous complaints — that was representative of the larger concern.

Officials attempted to solve that difficulty by shortening the length of time messages appeared, but the sign technology doesn’t allow for such modifications — all messages display for two seconds.

In light of the concerns over disabled riders, SFMTA staff say they were also worried the messages might expose the agency to a lawsuit.

“The longer we wait, the greater the possibility of someone filing an ADA lawsuit or complaint with FTA or the State of California which could be a major problem,” said David Hill, Deputy Director of Transit Management in an internal SFMTA email message obtained by The Appeal.

The program has been operating since at least 2010, but in 2013 the SFMTA has added many more non-route related messages than in the past. Transit officials were unsure of the exact date the program began.

The SFMTA admitted in August to local activist Michael Petrelis that the transit agency has never had a formal written policy for placing non-route messages on the Muni fleet, nor does it charge to display promotional messages.

Reiskin told The Appeal that the transit agency wasn’t able to come up with a fair and equitable policy that would govern non-route information on the signs, a fact that contributed to the decision to terminate the program.

For example, last year “Equality for All” appeared in honor of Pride 2012’s theme. Matthew Bajko of the Bay Area Reporter worked with District Eight Supervisor Scott Weiner, and the SFMTA to add the Pride slogan to Muni’s fleet, according to Bajko.

“I couldn’t get the spokesperson for Muni to call me back,” Bajko said, adding that after he contacted Weiner, the SFMTA agreed within “minutes” to add the messages.

Following April’s bombings at the Boston Marathon, “We Stand with Boston” appeared on buses at the request of an SFTMA employee, who “made the request through operations that we should post signs in solidarity,” Rose said, “And they were posted.”

However, despite Muni’s apparent willingness to display certain non-route related messages in the past, Petrelis had little success adding his proposed Pride 2014 theme of “Housing for All” to Muni’s fleet over the summer. Petrelis’ request was ultimately rejected at around the same time the SFMTA eliminated the program.

“Well funded corporations have access to public space, but there’s no process,” Petrelis told The Appeal in apparent frustration.

“The billionaires received free publicity to boost awareness about their teams, which likely meant more ticket sales and profits for the owners.”

Reiskin doesn’t see it that way, and told The Appeal that he had difficulty believing an argument that the sports-related messages generated any additional ticket sales. The intention was always to demonstrate “civic pride” and allow the transit agency to participate in some of the “feel-good stuff” of the city, Reiskin said.

Petrelis’ request came in “about the same time we started getting feedback” and that there is “no real reason there wasn’t a policy” about the vehicle read-outs, SFMTA spokesperson Paul Rose said.

And now, regardless of their informal use in the past, the bus signs will no longer be available for any non-route displays.

“There wasn’t a formal policy because this was a goodwill gesture for the community,” Rose said.

But, for community members such as Petrelis, the SFMTA’s policy represents a double standard.

“[Terminating the program is] Just one more reminder of how there are two San Francisco’s when it comes public property and a set of unwritten rules for the rich and other more restrictive rules for ordinary citizens,” Petrelis said.