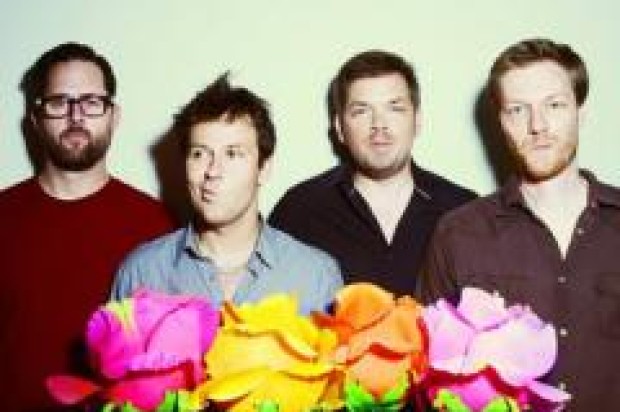 You’d be hard-pressed to find a better conversationalist than The Dismemberment Plan‘s frontman Travis Morrison. Known for his conversational style and near-deadpan delivery, a simple listen of Uncanney Valley brings you into the band’s practice space and right alongside Morrison and co., especially in how they debuted their first single, “Waiting”.

Akin to Appeal favorites They Might Be Giants and their early dial-a-songs, fans could call into 252-64-DPLAN and give the track a listen. The DC group evokes the type of connection with their fans that inspires them to quite literally give The D Plan the shirts off their backs, though Morrison apparently draws the line at other people’s pants.

“That’s a little too intimate,” Morrison tells the Appeal. “People are usually running up on stage and giving us clothes. We get a lot of food, especially cakes and cookies. It’s wonderful. People definitely talk to us. We’re kind of a neurotic band. The strangest things I’ve gotten, though, was a book of CS Lewis’ cultural criticisms.”

For a band whose attention to lyrical detail goes hand in hand with its literary-minded members, it comes as almost a surprise that their latest LP, Uncanney Valley, hit shelves with a typo. The deliberate misspelling was all style, according to Morrison.

“I wasn’t completely sold on the title, actually. I did the misspelling by accident and it went to print and I just really liked it. Uncanney Valley: it looks like a community in Virginia.”

The band has found the type of renaissance rarely seen in returning acts. After a one-off reunion in 2007, the band again converged in 2010 to announce another reunion show, this time to commemorate the reissue of Emergency and I. It didn’t take long for that initial notion to turn into plans for an album and full-blown tour. What’s followed is a series of impeccable shows, including performances with and near Morrison’s personal heroes, the Replacements.

“We got to see the Replacements twice, which was amazing. Our shows on this tour have been great so far. We really haven’t had any bum shows,” Morrisson says.

“Our first show in Chicago was really great for us. There was this driving rainstorm but Chicago, they were hardcore. Chicago is tough. In DC we had an ASL translator because there were these deaf dancers that wanted to see us. She got really into it and they really had a good time.”

Tuesday’s show at the Fillmore marks the band’s first appearance at that venue, though they’ve previously played everywhere in SF from Bottom of the Hill to Bimbo’s. The band is unsure what, if anything, comes next after this run of tour dates. Morrison likens making plans to mortality, though the Dismemberment Plan rarely sounds like a morbid band. Simply put, they’re an introspective act offering up “emotional pyrotechnics.”

“Sometimes I feel like we don’t adjust our shows that much but we’re really just ourselves,” Morrison says.

Catch the Dismemberment Plan at the Fillmore this Tuesday, December 10. Purchase tickets here.