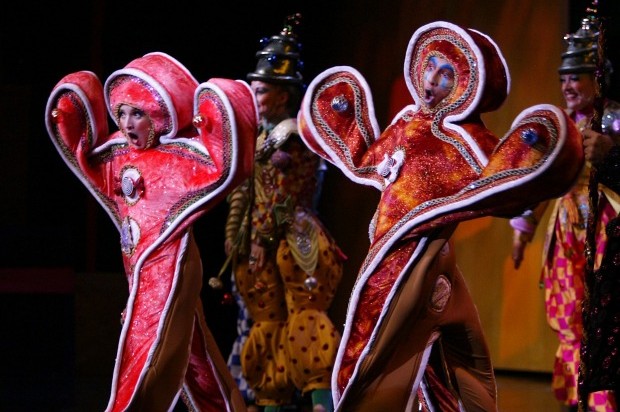 Before attending the San Francisco premiere of Cirque Dreams Holidaze, I had dinner down the street at Cafe Royale. (Just OK; my coq au vin was very dry and needed salt.) While leaving the restaurant, I slipped down a short flight of stairs, and my spike heel tore through the hem of my dress.

Yes, I was on my way to watch people walk tightropes, flip through the air, and balance on shaky objects, and I couldn’t even leave a restaurant without falling down. But my pratfall was not the evening’s most cringe-inducing moment.

What can be said about the Cirque Dreams series of shows that can truly explain how jaw-dropping they are? They have eleven of these, touring around the world, all with different themes, (I’m dying to see Cirque Dreams Dinner!), with this one themed around Christmas.

In short, it’s what I imagine a meth addict might dream were he to pass out under the Christmas decorations in a strip club.

Before the start of the performance, an announcement comes over the PA asking that the audience not film or take flash photos, lest they distract the performers as they go about their death-defying routines. What they don’t say is that those performers are going to be distracted enough by the endless stream of insanity that prances before and behind them on stage.

As the curtain opens, you see a stage filled with inflatable candy canes, a larger than life toy train, glittery stars, a Christmas tree of lights and crystals, a backdrop featuring a crescent moon, giant presents, and a constant stream of costumed characters of various crazy creations.

Three singing performers are the “hosts” through the fever dream, singing both classic and not-so-classic Christmas carols.

Also, the painted ceiling over the stage looked like vaginas with faces. And yet, that’s NOT the craziest thing to appear on stage that night!

Actually, it’s hard to pin down just what WAS the craziest thing on stage. Perhaps it was the weird guy with a giant crescent moon head, who crept onto the stage during one of the female acrobat’s performances, climbed the Christmas tree, and leered down at her performance, only to silently slink off once she was done.

Or maybe it was the slithering candy canes that looked like crunched up drinking straw wrappers come to life, doing this weird, worm-like crawl across the stage, behind the leaping gingerbread men.

Or maybe it was the 10-foot-tall bopping snowmen with weirdly phallic bouncing carrot noses.

The point is, there is such a constant, CONSTANT parade of action going on during the entire show–along with non-stop music straight out of a 90’s direct-to-video movie–that it’s often hard to concentrate on the real stars of the show: the amazing acrobats.

And they really are amazing. I was able to keep my eyes on a few long enough to pick out some favorites. The standouts were definitely the younger performers, including the two “gingerbread men,” (Samail Haftu and Amanual Hayle), who did some terrific paired leaps, flips, and twists. Another standout was a young girl, (Alexandra Koroleva), who played a marionette and a child who visits Santa. (I’m convinced she has no bones or cartilage in her body. That’s the only explanation for such flexibility.)

I also loved the “fashionista” (Olga Smirnova) who did about a dozen instantaneous costume changes that were spectacular. I know it’s just well placed Velcro and quick release straps, but “magic” costume changes will never cease to delight me.

Not everything went off without a hitch. One of the performers (Victor Dodonov), dressed as a sparkly penguin, piled up a number of wobbly items he had to balance on, reaching a pinnacle of about six. His first attempt failed, so the audience cheered for a second attempt. And, bless that sparkly penguin, but that second try failed as well. I’m pretty sure the audience was willing to just let this stunt pass, but the penguin wasn’t, so he went for it one more time.

Which leads me to believe that Cirque Dreams performers must be shot after the show if they don’t perform up to snuff, so adamant was that penguin to get that stunt done. (Don’t worry, the penguin’s still alive; third time’s the charm!)

The show ends with the most inappropriate use of the song “O Holy Night,” ever. Unless a song about the birth of the baby Jesus is standard musical backdrop for creepily sexual man/woman trapeze routines. I don’t know, maybe it’s just me, but I don’t like looking at a shiny, half naked man (granted, an amazingly well built shiny, half naked man), while hearing about our dear savior’s birth.

On Jerry Seinfeld’s web series “Comedians in Cars Getting Coffee,” guest Brian Regan has a bit about how the Cirque du Soleil boss has basically never said no to any idea ever tossed at him. “Elephants painted gold, and they come in with helicopter launching pads on their backs, and helicopters land, and monkeys come out and play kazoos?” “…YES!”

So, while there are no elephants or monkeys in Cirque Dreams Holidaze, there is more than enough stuff almost as crazy. You won’t be bored. But keep in mind, this ain’t a chamber drama. This is more like the theatrical performance John Merrick gets taken to in The Elephant Man.

Basically, Liberace would likely have come away from it saying, “You know what guys? Take it down a notch.”