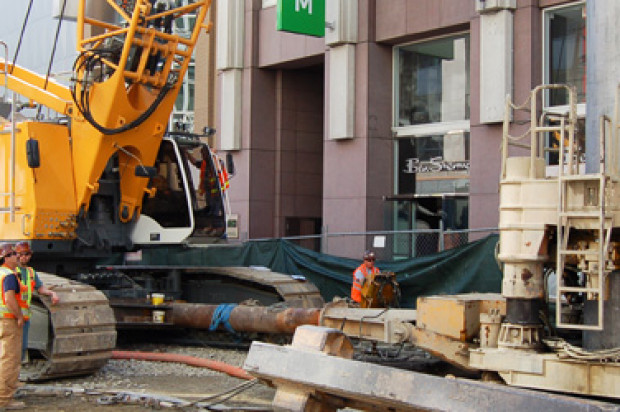 Residents and business owners in San Francisco’s Chinatown and North Beach neighborhoods are calling for a holiday moratorium on construction related to the Central Subway project.

The concerned citizens held a news conference today to discuss the $1.6 billion project, which they say is causing excessive noise and traffic backups in their neighborhoods.

The Central Subway, scheduled to open in 2019, will be a new branch of the T-Third line from the city’s South of Market neighborhood with stops at Yerba Buena/Moscone, Union Square/Market Street and Chinatown, according to San Francisco Municipal Railway officials.

Construction crews have stopped working near Union Square and reopened Stockton Street between Geary and Market streets to facilitate traffic flows during the holiday season, but the work is continuing on private property in Chinatown and North Beach, Muni spokesman Paul Rose said.

Lance Carnes, a member of the group Save North Beach Village, stood this afternoon across the street from one of the private sites, the former Pagoda Palace Theater, which has been torn down to make way for the extraction of two large tunnel-boring machines.

Carnes said the construction is negatively impacting nearby restaurants and shops, particularly during the holiday season.

“During the holidays, it’s a complete slam,” he said.

Winston Smith, a resident who has lived for 20 years in an apartment on Union Street overlooking the Pagoda site, said loud construction lasts until 11 p.m. six days per week right outside his window.

“It feels and sounds like you’re getting a root canal,” Smith said. “It’s impossible to sleep.”

Howard Wong, co-chair of the group A Better Chinatown Tomorrow, said construction at another private site at Stockton and Washington streets is hurting nearby shops that want to have a break during the upcoming holiday season.

“These merchants have very small profit margins,” Wong said. “They cannot weather years of construction like the department stores downtown.”

Carnes and Wong were among a group that filed a federal lawsuit last month seeking to halt the project because of its potential impact on historic sites in North Beach.

Along with the lawsuit, Wong said his group is also seeking reimbursement from the city to merchants for economic losses caused by construction.

Rose said Muni “is addressing concerns on a case-by-case basis” and has also taken measures to minimize impacts from the construction, including building sound-reducing walls around the Pagoda site and cleaning any areas impacted by the work.

The latest information on the Central Subway project can be found online at www.centralsubwaysf.com.