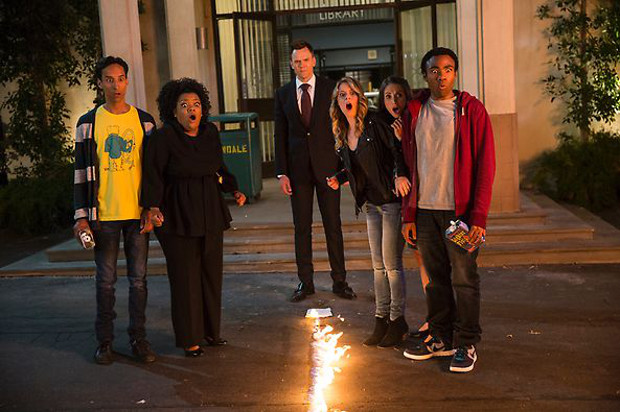 I’ve seen New Year’s resolutions you people wouldn’t believe. Getting back into yoga. Reading a book a week. All those moments of optimism will be lost in time, like a HGTV marathon of House Hunters International. Time for TV.

But screw all that because VH1 bought the rights to the gone-before-its-time-madcap-slice-of-hilarity Happy Endings and will be showing all 57 episodes during New Year’s Eve and Day, starting 8pm Tuesday. This is unequivocally the best thing VH1 has done in years.

Wednesday, January 1
Nurse your hangover (or existential crisis), and welcome 2014 with a marathon of reruns as the after-glow optimism and promise of 2014 fades into glazed over mediocrity. Here are some highlights:

Thursday, January 2
Community (8pm, NBC, season premiere)
After a universally panned season four, Community creator and original showrunner has been given back the reins to the show he was unceremoniously (and publicly) dumped from last year. To top off the departures of Chevy Chase and Donald Glover, naming the season premiere Re-Pilot is season five’s thesis statement. Rage, rage against the dying light (and also Big Bang Theory).

Six seasons and a movie.

The Taste (8pm, ABC, season premiere)
The second reality show focusing on a different bodily function (the first being The Voice, duh) returns for a second season with Anthony Bourdain, Nigella Lawson, and Ludo Lefebvre returning to the judges table, with chef Marcus Samuelsson joining the judges for his first go-around. Just as an aside, anybody who ever uses the term ‘celebrity chef’ to describe a chef shouldn’t be trusted with words to describe people. Let’s end this with a Nigella Lawson double entendre supercut.

Friday, January 3
Oprah: Where Are They Now? (9pm, OWN, season premiere)
Assuming you even get OWN, you can check-in on how Kristin Chenoweth, the cast of Queer Eye for the Straight Guy, and Gary Busey (who never really leaves, just reappears like a viral infection) are doing. Remember Queer Eye for the Straight Guy? They’re coming back, in pog form.*

Saturday, January 4
Mythbusters (8pm, Discovery, season premiere)
To kick off its eleventh year of mythbusting, Mythbusters x Star Wars (which makes it sound like a streetwear collaboration). In a collision of some hella BAY AREA things, see your favorite Star Wars myths put to the test, and maybe we’ll finally get proof that Han did shoot first. If anything, One Tree Hill’s Sophia Bush is in Princess Leia cosplay.

In lieu of a clip from the show, here is a video of people getting caught in Black Friday stampedes set to the America’s Funniest Home Videos theme my friend James cut together. Now let us never speak of the holidays again. Until next year.

Downton Abbey (9pm, PBC, season premiere)
Yeah but, are they going to reveal which one of them is actually a Dalek? And then the Doctor comes, says a bunch of witty things, busts out the Sonic Screwdriver, and fixes a tear in space-time?

See you next Monday! In the future!