Appealing TV: A Very Doctor Who Christmas, Antiques Roadshow, and Sex Sent Me to the ER 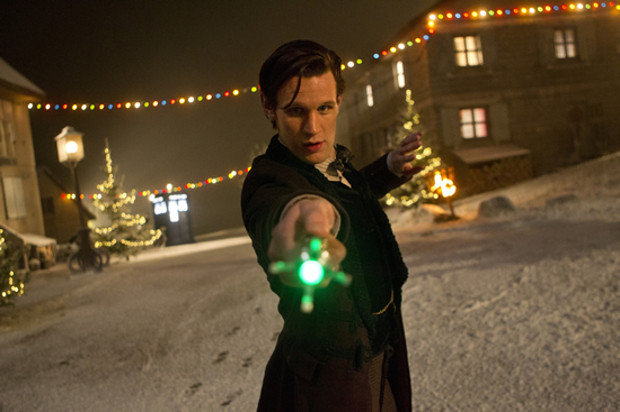 It was the Eve before Christmas Eve and all through the house
I tried to watch an episode of Duck Dynasty to see what the fuss was all about
I guess when you make more money than god
It’s easier to put words in its mouth
And to the people who say ‘what the hell is this show and why is it so renown’
Have never been to a Wal-Mart in a flyover state town?
Let’s never speak about this again
But remember, to them, it’s all just a matter of perception management.

Monday, December 23
Antiques Roadshow (8pm, PBS, season finale)
(In the year 2033)
“Uncle* Paolo, what is Antiques Roadshow?”
“Before the economy collapsed and the United States of America switched to a Pawn Stars based economy, there was a show on public access called Antiques Roadshow, which was like Pawn Stars only hosted by television personality Mark L. Walberg (not to be confused with Vice President Mark Walberg), who hosted FOX’s Temptation Island in 2003, which, looking back, was the beginning of the end of it all. Antiques Roadshow was the granny panties of reality goods-appraisal programs. Dependable, but lacking the flash and sex appeal of Pawn Stars. But after all, it was supported by viewers like us.”

Side note: Having Cash in the Attic is not the same as having money in the banana stand.

*In the future, the state revokes my right to have children. I’m okay with it.

Hollywood Game Night (10pm, NBC, season premiere)
Celebrities! They’re like you and me! They play games! They drink casually! They have witty banter! Your celebrities for the second season premiere are Ray Romano, Cheryl Hines, Gavin DeGraw, Rachel Bilson, Andy Roddick and Brooklyn Decker. Jane Lynch hosts, and if nobody says that this will be a swinging good time, I’ll riot. Why can’t my family game nights be this sexy and happen after the safe harbor hours?

Tuesday, December 24
White Collar Brawlers (10pm, Esquire, season finale)
Bay Area locals Kai Hasson and Nate Houghteling’s web series that featured them training as boxers has made the jump to the Esquire Network and is ending its first season tonight. Watch office professionals train as boxers and fight in the ring.

Wednesday, December 25
Doctor Who (9pm, BBC America)
This year’s Doctor Who Christmas special, “Time of the Doctor,” will also act as the farewell episode to eleventh Doctor Matt Smith, and introduction to twelfth (and final?) Doctor, Peter ‘FUCKIDY BYE‘ Capaldi. I’ve mentioned it before but my first experience with Doctor Who was accidentally coming across Matt Smith’s first Christmas special, “A Christmas Carol.” And in my short time of watching Who, the Christmas Special is the closest thing I got to a tradition. So I know I’ll have the sadness water leaking from my face.

Thursday, December 26
Mysteries of the Castle: Beyond Downton Abbey (9pm, ABC)
Leading up to its season premiere next week on PBS, ABC is airing a 20/20 two-hour special on the PBS costume period drama. With 20/20 at the helm with its own brand of hard hitting investigative journalism, don’t be surprised if this special turns into a piece about some midlevel orthopedic doctor in Ohio who kills his wife in order to collect the insurance.

Friday, December 27
Nikita (9pm, CW, series finale)
With a farewell episode titled ‘Canceled,’ you can bet that the sexy spy drama starring Maggie Q will go out with a bang. Because guns and sex.

Saturday, December 28
Sex Sent Me to the ER (10pm, TLC, series premiere)
Well you know what they say about sex, if it doesn’t send you to the ER, you are doing it wrong! Wait, that’s not how it goes? Shit. No, that’s BBQ. No, that’s base jumping. No, that’s gluten. Anyway, from the people that brought you Untold Stories of the ER comes more hospital re-enactments of sex gone wrong. You can’t spell ‘erotic’ without ER, after all. While not officially premiering until January 3, catch a sneak peak of the show that will no doubt be setting the television blog space on fire in 2014.

Sister Wives (9pm, TLC, season premiere)
Fringe polyamorous Mormons? Pssh. Call me when they are mermaids, or witches. Or if they appraise goods from palookas trying to make it rich.

See you next Monday! And have a great Christmas! Or don’t! And that’s totally fine! Have fun with your hump day jokes!