Another Victim Of The BART Strikes? The Tenderloin Drug Trade 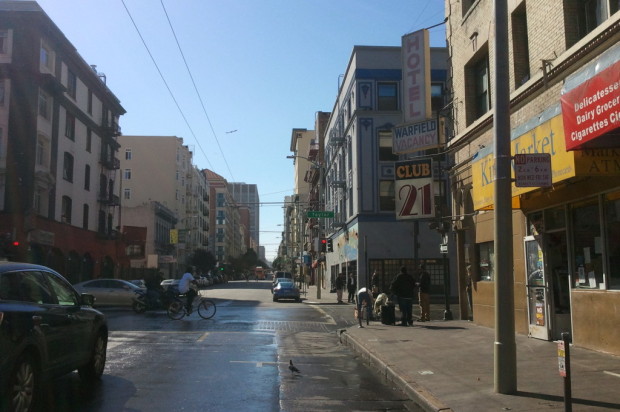 With BART’s contract with workers in dispute and a third strike still considered a possibility, a less talked about group of Mid-Market entrepreneurs would be adversely affected by a strike’s resulting gridlock and transit jams: Tenderloin drug dealers.

According to officials, during the two recent BART strikes, street-level drug sales within the Tenderloin’s boundaries dropped noticeably, largely because the region’s clogged transit arteries prevented those interested in selling and buying narcotics from reaching the Tenderloin — a neighborhood long known as one of the most popular open-air drug markets in the region.

Precise data regarding the drop in narcotics sales is challenging to obtain, as illicit activities are notoriously difficult to monitor, law enforcement officials said. And the available SFPD crime data for July and October, when the first and second strikes occurred, only lists incident reports, and arrests, both of which showed little deviation from the norm.

However, community members, law enforcement officials on the ground, and the drug dealers themselves all observed the same thing: Sales were down, buyers were scarce. Much like what other, more legitimate businesses reported the strike did to their their operations.

“The BART strike was very interruptive to the cash flow,” said a crack-cocaine dealer who spoke to The Appeal on the condition of anonymity. Most of the wealthy buyers from outside the city stayed away from the neighborhood, the dealer said, noting that those customers probably thought fighting traffic was too much of a hassle.

Members of the community noticed a “tangible” difference on the street during the strike as well. “I couldn’t believe it at first, but day after day, the drug dealers weren’t there like they usually were,” said Dina Hilliard of the North of Market Tenderloin Community Benefit District, “And the buyers weren’t there either.”

The SFPD too had anecdotal evidence that supported the BART strike’s impact on illegal narcotics sales. “A number of community members have informed me that there were noticeably fewer dealers operating in the open-air drug markets in the Tenderloin for the duration of the BART strike,” Capt. Jason Cherniss told The Appeal.

While some dealers and users apparently prefer BART for their commute, it isn’t the only option. Many who live outside city limits rely on Caltrain, buses, and their cars to get to the Tenderloin, Capt. Cherniss has told this reporter in the past.

“I lived in the Tenderloin during the strike,” the dealer said, “It took me like two and a half or three hours to get there the first day. And I only live in East Oakland.” The dealer noted that the car was the preferred mode of transportation for the daily commute.

Cars are popular among dealers that have higher day-to-day sales, said law enforcement officials. That’s because most dealers only want to carry a certain amount of their drug of choice. They stash the remainder of their product in a vehicle, so they can “re-up” during the day, and to limit their liability in case of an encounter with police, officials said.

The Tenderloin’s continued existence as a drug haven of sorts confounds experts who study narcotics trafficking and sales. There was a huge change when technologies like the cell phone and the Internet became popular — and those technologies make selling drugs easier, according to drug historian Dr. Paul Gootenberg. “An open air drug market must have a specialized clientele.” Law enforcement’s recent attempt to shut down the Silk Road is only one such example.

Even in an age where technology has made tracking human behavior more and more commonplace, for the most part drug trafficking experts still struggle to construct an accurate picture of the black market. Most rely on a hodgepodge of information cobbled together from various government and NGO sources, said Gootenberg. Government sources that are, he says, often incorrect.

“The government tries to pretend it has all the indicators,” Gootenberg said, “In reality, it’s much more difficult to research drug consumption trends.”

The same is true for the Tenderloin. According to police data there have been 240 drug related arrests since October 1, the majority of which are for the most popular drugs in the neighborhood — crack, heroin, methamphetamine, cannabis, and prescription drugs.

The Tenderloin drug market’s apparent popularity is likely the confluence of several factors — one of which is the fact that narcotic sales aren’t controlled or taxed by gangs. And there are likely other, historical factors at work — a neighborhood with a reputation that proceeds many of the hard-working city residents, hoping for a better life.

“I don’t know how to explain the Tenderloin,” the dealer speaking anonymously said, “It’s like the universal bridge. I’ve been to a lot of places… Miami, L.A., from here to Louisiana. But, there’s no Tenderloin like this.”

One thing is clear: the dealers and addicts were not missed during the strike. “It was kind of nice for a change,” Hilliard said.