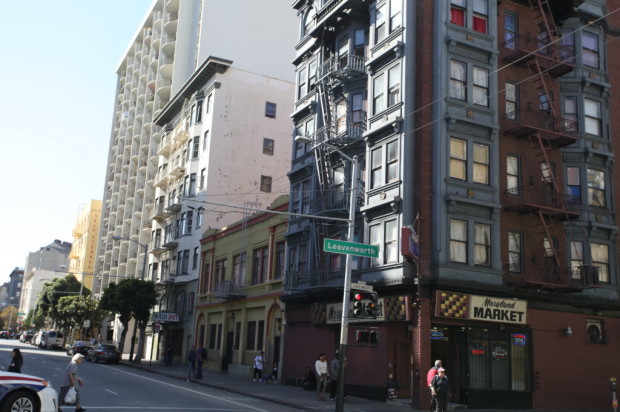 Hundreds — maybe thousands — of children walk home alone, or with little supervision through the Tenderloin, five days a week, 10 months a year.

The children attend one of several public and private schools either inside the Tenderloin’s loose boundaries, or just outside in nearby SOMA. Twice a day — once in the morning, and the second time around 3 P.M. — kids walk several blocks either home or out of the neighborhood.

Currently about 4,000 children attend school in the area, according to Dina Hilliard, of the Tenderloin Development Committee. Hilliard participates in a program called Tenderloin Safe Passage, which aims to keep the school children safe by escorting them through some of the more dangerous areas.

Data regarding exactly how many of these 4,000 kids walk home unaccompanied is hard to come by.

[Drug dealers] “put their hands up so the kids can’t see anything…It was actually very heartwarming”According to a recent count on a single day at the corner of Turk and Leavenworth — known by Tenderloin cops as “Pill Hill” due to the availability of prescription opiates or “Roxies” — Safe Passage observed 171 children between 2:45 and 3:15 P.M.

The Safe Passage program began in 2008 at the request of numerous Tenderloin residents with children attending schools in the district. (The San Francisco Unified School District did not return repeated phone calls and email messages from the Appeal requesting comment for this story.) Apparently, a child got lost in the neighborhood — although it turned out the boy had just returned home safely — but the scare ignited a conversation.

“Who’s looking out for the kids walking around?” Hilliard said.

Originally, the plan included an escort for the children to and from school. But ultimately, the community decided that wasn’t the best option. The Boys and Girls club already had a walk-home program and, “We formalized what they were doing, and called it Safe Passage,” Hilliard said.

When the program first started Corner Captains, as the volunteers are called, handed out candy and postcards to the drug dealers, in order to engage in conversations about what they were up to. Communication is critical to the program’s ongoing success, Hilliard said.

Safe Passage’s purpose is to make the kids feel safe — and show the drug dealers who populate the street during daylight hours that the kids are not to be interfered with. “We’re not out there to shoe away dealers, that’s a byproduct of us being there,” said Hilliard. “The longterm goal would be for them [drug dealers] to leave, but it’s a secondary focus at the moment.”

Officials say that there’s an unwritten moral code among the neighborhood’s criminals — to leave the children out of their nefarious behavior.

“When I see kids walking through the street, drug dealers leave,” said Cpt. Jason Cherniss, Captain of the Tenderloin Station.

Although drug dealers behaving morally — albeit only to some degree — and keeping the kids away from their business sounds unlikely, The Appeal’s investigation confirmed with multiple sources that such behavior indeed occurs.

“They [the drug dealers] put their hands up so the kids can’t see anything,” said District Six Supervisor Jane Kim, who’s area of representation includes the Tenderloin. “It was actually very heartwarming.”

The Tenderloin is a neighborhood that continues to capture San Francisco’s imagination as a place where some residents have found redemption in the face of adversity — many of whom are convicted of sex-crimes or narcotics offenses.

“Our Tenderloin residents are trying to defy that stereotype of ‘we need rich people and a middle class to improve the neighborhood,” Kim told The Appeal.

Yet, the Tenderloin remains one of San Francisco’s more dangerous neighborhoods. In October there were 1017 criminal incidents reported to the SFPD, according to police data. In comparison, there were 1059 incidents in the Bayview, 1500 incidents within Mission Station’s jurisdiction, and 2300 at Southern Station — which handles SOMA.

Despite this, the Safe Passage program doesn’t want a police escort, and rarely makes 911 calls, Hilliard said. That’s because it’s important for the volunteers out on the streets to remain safe, something they cannot do if the drug dealers believe they’ll call the cops if they see illegal activity. When making a call is necessary — due to safety concerns — Corner Captains are instructed to step into a near by business to make the call.

Corner Captains wear bright yellow vests so that the children can identify them, and are given training about how to deal with dealers and dangerous situations.

“95 percent of the time dealers will move, but every once and a while some of the meaner drug dealers will harass corner captains,” Hilliard said.

Cherniss praised the Safe Passage program, saying that such service providers “really engage with the community” and that community problems like narcotics operate at a different level than police do.

“These are people that understand that we need to do what we can,” he said.

Safe Passage is having a hard time getting enough volunteers onto the corners and welcomes members of the community who wish to participate. For example, the program currently does not have enough volunteer Corner Captains for the morning commute to school. If you’d like to help Safe Passage, you can arrange to make a donation or contact them to volunteer at tenderloinsafepassage@gmail.com