Serious Sounds: Someone Still Loves You Boris Yeltsin at Brick and Mortar 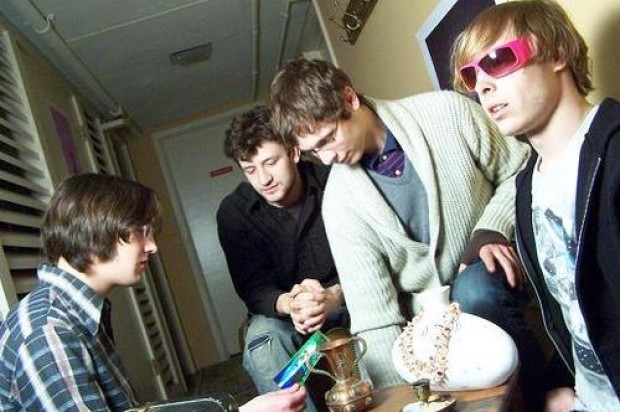 A typical interview with Someone Still Loves You Boris Yeltsin tends to start with a question on their name. No, SSLYBY didn’t think they’d still be rockin’ the Russian President love over a decade later and yeah, the name’s been a pretty cool double-edged sword.

While many may see such a moniker as grounds to stagnate in the indie world, SSLYBY have continued to reinvent themselves, finding an ever-widening audience thanks to the unique opportunity to visit Russia with the Boris Yeltsin Foundation. That trip has been turned into a documentary, entitled Discussions With Russians.

“We’re making it with our friend (Brook Linder) who’s been making all our music videos since he was in high school,” frontman Phil Dickey tells the Appeal.

“He went to Russia with us and got a huge amount of somewhat surreal footage: bumming around in Tolstoy’s backyard, eating borscht with the US Consulate and a couple of Boris Yeltsin’s former colleagues, and learning to play Boris Yeltsin’s favorite song in less than 10 minutes on a national TV network.”

“Also, we have old VHS footage from 1999 when we started the band at Will’s house. So the documentary is going tell the whole history of the band.”

The band’s history has recently come full circle. Their latest album, Fly By Wire, sees the band returning to their roots and recording in the place that first brought them together: guitarist Will Knauer’s parents’ attic. That cozy spot promoted a bevy of creativity and comfort and SSLYBY is tighter than ever. Standout tracks “Loretta” and “Harrison Ford” instantly recall their earlier, breakout work; fluid melodies coursing around the tightest of harmonies in a blanket of sound.

SSLYBY is never one to take themselves too seriously, however. There’s a definite poignancy to Fly By Wire, but when prompted to explain the recursive bent from debut LP Broom to now, Dickey and Knauer are more keen to riff on cliches than delve deep within their psyches. One thing that particularly stands out, however, is just how free-spirited their process tends to be.

“I don’t think we ever know what the record will be like when we go in to record it. I’m always surprised how it turns out in the end. It’s hard to say what caused this one to turn out like that, but yeah the attic maybe helped it seem more mellow,” Knauer explains.

The band is set to hit Brick and Mortar Saturday and is definitely bringing a bit of playfulness to their performance. When asked what fans can expect from a SSLYBY show, Dickey jokes, “something old, something new, something borrowed, and something blue.”