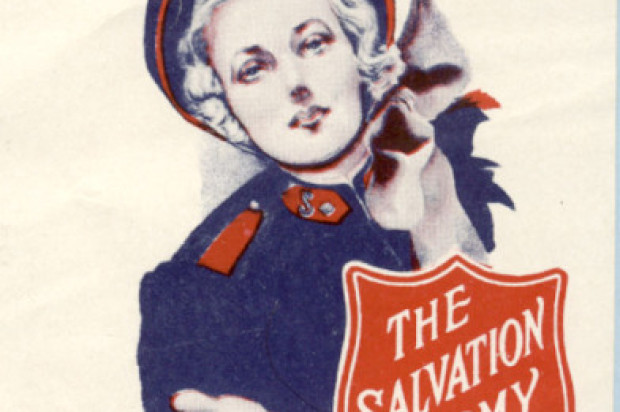 The ringing of bells will be heard at storefronts throughout the Bay Area this holiday season, as the Salvation Army kicked off its 123rd annual Red Kettle Campaign in San Francisco this morning.

Amid raindrops and with a backdrop of the San Francisco Ferry Landing, the birthplace of the original donation kettle back in 1891, a ceremony was held to honor the longstanding tradition that has brought critical support to so many in need.

A lone Salvation Officer dressed in an 1890s era uniform was stationed with the kettle to replicate the beginning of the tradition when a Salvation Army captain in San Francisco in 1891 hoped to raise enough money to provide a free Christmas dinner to the area’s poor, according to Hendricks. Instead, he was able to feed hundreds that Christmas by raising much more than he anticipated. And so, the tradition was born and is much alive today.

Hendricks said today’s short ceremony, though wet, was comical in that although the weather was poor, those in attendance were rich in spirit.

“With all the rain, many people coming off the ferry wanted to get out of the rain and into shelter, but about a dozen brave souls contributed and supported the event,” Hendricks said. “Everybody’s spirits were up.”

The Red Kettle Campaign aids the Salvation Army in helping more than 4 million people nationwide in need during the Christmas season and about 30 million annually. All the money raised in the communities, stays in the communities, according to Hendricks.

The San Francisco Salvation Army has 16 facilities that offer aid to residents including meal delivery, youth services, drug and alcohol rehabilitation and transitional housing, among others. In greater Bay Area there are closer to 40 community centers and shelters, Hendricks said.

The agency hopes to meet or exceed that again this year.

“Every year we try to meet or exceed the previous year’s amount,” Hendricks said. “Even though the recession is decreasing, the need is not.”