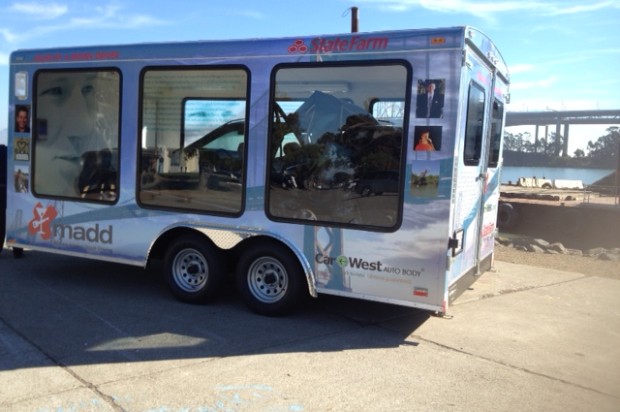 The parents of a drunk driving victim killed five years ago unveiled a trailer with the vehicle their son was in to remind people the dangers of being intoxicated while behind the wheel.

On the early morning hours of Aug. 17, 2008, Scott Leister was in a Mercedes E420 traveling east on the San Francisco-Oakland Bay Bridge east of Treasure Island when it was rear-ended by a Subaru Impreza WRX traveling more than 100 mph.

Leister, 21, of Castro Valley died at the scene while three other occupants had minor injuries, according to the California Highway Patrol.

Fairfield resident Jerell Puno was the driver of the Subaru, which caught on fire in the crash. He had a blood alcohol content level twice the legal limit and walked away from the crash with minor scrapes, according to the CHP.

He was convicted in 2010 on charges of gross vehicular manslaughter and sentenced to 10 years and eight months in state prison, Alameda County district attorney’s spokeswoman Teresa Drenick said.

Chris Leister called his son “a world citizen” and recalled the multiple volunteer opportunities Scott Leister participated in such as building dorms in the Dominican Republic to helping out with Habitat for Humanity in Alameda.

“He was just a great human being,” Chris Leister said.

“(Scott’s) dream was thwarted and the world was diminished by his death,” Carol Leister said.

The couple is involved with Mothers Against Drunk Driving in the San Francisco Bay Area and asked the organization to purchase the vehicle from State Farm and install it in a trailer, MADD Executive Director Jody Iorns said.

Carol Leister said they hope to raise awareness against drunk driving “with each mile this trailer travels and each pair of eyes that see it.”

The trailer was custom-made by FJM Truck & Trailer Center to accommodate the Mercedes and completed last month, Iorns said.

Any schools, organizations, government entities or other groups interested in displaying the trailer may do so by contacting Natasha Thomas of MADD at Natasha.Thomas@madd.org.