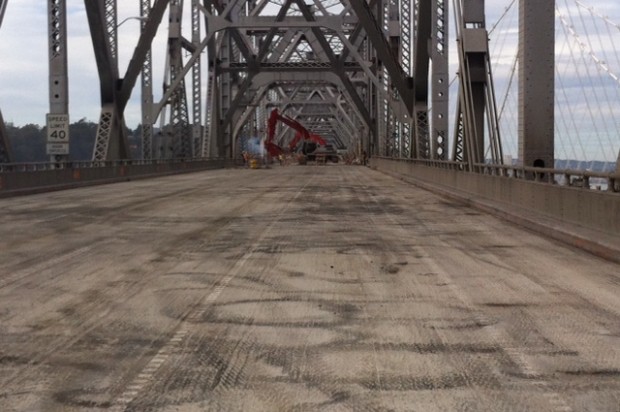 After standing for nearly eight decades, the old eastern span of the Bay Bridge is slowly coming down starting today as crews begin demolition work on the cantilever portion of the bridge.

Traffic moved onto the new eastern span in early September, making way for the disassembling of a bridge that was built in 1936 and had been slated for replacement ever since the Loma Prieta earthquake damaged it in 1989.

After removing asphalt and doing other prep work in recent weeks, crews this morning began the first official phase of the demolition of the upper deck of the old span by removing concrete, rebar and floor beams that hold up the roadway, bridge spokesman Andrew Gordon said.

“This is day one of the work starting in earnest,” he said.

A 1,400-foot section of the upper deck will be removed over the next six weeks as part of a project estimated to last three years, Gordon said.

The work was initially scheduled to start last week but was delayed until today so crews could finish installing a debris containment system on the lower deck to catch any concrete or metal that may fall during the demolition, according to Gordon.

“You plan as much as you can, but you really don’t know what’s going to happen when you start cutting into a bridge that’s this old,” he said.

About 2,125 tons of concrete will be removed during the next six weeks, as well as 1,300 tons of the steel deck beams and 375 tons of rebar.

Subsequent demolition work will take place starting next year farther east on the bridge, with two separate contracts for work above and below the water line, Gordon said.

The demolition of the bridge will eventually allow for the completion of the new span’s bike path, which currently stops short of Yerba Buena Island. The bike path is expected to be extended to the island by mid-2015, Gordon said.

Crews are also still working to finish the permanent fix for faulty bolts on the new eastern span.

Saddles that will be placed over the bolts to support them were first expected to be in place by December, but will now be installed by Jan. 8, Gordon said.