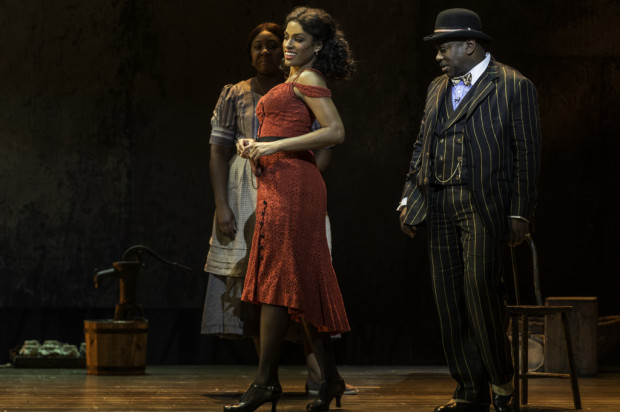 Ira and George Gershwin’s Porgy and Bess is a classic and historical opera not without its share of controversies, dating back to its 1935 premiere. In some ways, it was a very bold bit of theater, featuring a cast of almost entirely African American characters, performing a musical style of singing (opera) normally dominated by white performers, in a score created by a white guy, utilizing a black form of music (jazz).

George Gershwin also insisted that the lead roles only ever be played by black actors, at least in U.S. productions. While kind of an obvious insistence to make, it was still pretty ballsy for its time.

Still, we’re dealing with a story about black characters, written by white men in the 1930s. Racist undertones are going to exist, which is why for many years, very prominent black artists were loath to perform in it. (Harry Belefonte famously refused the role of Porgy in the 1959 movie version, so the role went to Sydney Poitier instead.)

The current retelling, which makes its San Francisco debut at the Golden Gate Theater, first premiered on Broadway in 2012, and went on to win a Tony for best revival. But this retelling has its own set of controversies. Director Diane Paulus and writer Suzan-Lori Parks abridged the opera, and changed the all-singing aspect by adding some spoken parts, making it more of a theatrical musical than an opera.

They also added some depth to the character of Bess, who could often come across as a one note victim, and they’ve done their best to update the more blatantly caricatured aspects for some of the characters and dialogue. But some of these changes didn’t sit well with some purists, who deemed it sacrilege to mess with the Gershwins’ work.

But, a faithful adaptation done today could be laughable at best, and downright offensive at worst. I understand the desire to respect an artist’s original work. But history changes, and sometimes art should reflect those changes. It’s easier to appreciate a work as being “of its time,” when it’s actually from that time, like a movie. But when you are reproducing that work, and don’t have to repeat the embarrassing caricatures of its day, why should you have to?

All that said, I can still see the basic plot raising hackles. Set in 1930’s South Carolina, on a waterside stretch of housing known as Catfish Row, the musical focuses on a community that consists of husbands, wives, and fishermen, but also drunks, drug pushers, and beggars.

Porgy is the beggar. Deformed since birth, he walks with a limp and a cane. At the time, begging is the only real option a man like him would have to earn a living.

Bess falls into the “drunk” category, or, as one of the Catfish Row denizens deems her, “a liquor-guzzling slut.” She’s beholden to a heavy drinker and drug user named Crown, and they both get their “happy dust,” (the almost too precious nickname for cocaine) from the pusher and player named Sportin’ Life.

When Crown kills a man, Bess seeks solace in the arms of Porgy, and the two broken souls fall in love. But Crown isn’t gone for good, and Sportin’ Life always seems to be lurking just around the corner…

Audra McDonald won a Tony for her portrayal as Bess on Broadway, but Alicia Hall Moran has taken on the role for the touring production, and while she doesn’t quite have the acting chops of McDonald, she’s definitely got a terrific voice. Her duets with Porgy are some of the best moments of the show, particularly during “I Loves You, Porgy.”

Nathaniel Stampley is Porgy, and he’s heartbreaking. He definitely conveys Porgy’s sadness and “smiling in the face of hardship” demeanor, but he can be a bit unconvincing when it comes to showing his bubbling rage. As a result, a moment of violence feels more like an accident than something that’s been brewing up inside of him.

The supporting cast is large, but a stand-out is Danielle Lee Greaves as the tough-talking Mariah. Her condemnation of Sportin’ Life in the form of the song “I Hate Your Strutting Style” was probably the biggest crowd-pleaser of the night.

There are moments when the blend of opera and musical theatricality become an odd fit. This usually occurs when you have the entire cast just standing there, singing; that’s the opera. Then there are other moments when the entire cast will bust out a (genuinely terrific) dance routine; that’s the musical. There’s a separation of styles, when it really should be blended a bit more seamlessly.

And there are also moments that are just plain slow, and if it’s slow in a paired down two-plus-hours version, I’d be a little apprehensive to see the full-fledged operatic version. Purists may come away from this production shaking their head, but I think it’s a fine way to be introduced to this classic and spend an evening listening to some of the most memorable “showtunes” ever written.

The Gershwins’ Porgy and Bess plays the Golden Gate Theater through December 8th.