Circling Back: of Montreal Plays The Great American Music Hall 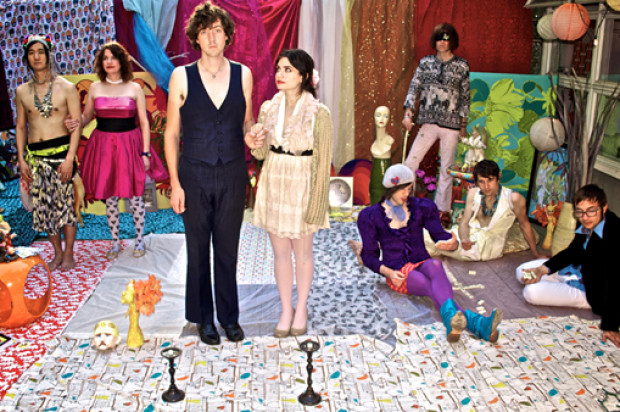 You can thank the city of San Francisco for of Montreal‘s latest critically acclaimed album, Lousy with Syvlianbriar. Of Montreal mastermind Kevin Barnes holed up in the city’s Mission District writing and recording and “being totally invisible” as he took in the sights and sounds of an ever-changing area as he went through his own metamorphosis.

Often known to be confessional, Barnes’ lyrics hit a particularly prescient point in Lousy with Sylvianbriar. Songs like “Colossus” and “She Ain’t Speakin’ Now” combine bursts of fitful melodies with pangs of tragedy. The former was inspired by poet Sylvia Plath while the latter comes from Barnes’ wife and daughter being bedridden. Unhappiness definitely informs Barnes’ music, but it’s not a main focal point. Neither is happiness a particular goal.

“I’ve never been that concerned about happiness,” Barnes tells the Appeal. “I think of happiness as an absence of turmoil, where there’s no real stress and you’re in a vegetative state. I’d rather have peace.”

Peace comes from a constant need to create for Barnes. Of Montreal has a strong aesthetic steeped in grand concept albums and transcending the recording studio, permeating their live performances. You haven’t truly experienced of Montreal until you’ve caught the unique visuals of psychedelic backdrops and an ever-changing array of lights chosen to fit the mood of every single song, right down to the band’s encore.

“My brother [David] and my wife [Nina] have always been very theatrical and created this visual set that’s constantly moving,” Barnes explains. “It’s not static and it’s not some basic lighting or visual scheme. That’s one of the things I don’t like about a live show. I want to keep it fresh. I’ll go to shows and think, ‘that band’s cool but after six or seven songs I want something more to happen.'”

On the subject of transcendence, Barnes is a full circle kind of guy. His invisibility in SF helped inform his album and comes right back to the stage during a particularly bright patch of visuals in which he climbs onto his brother’s shoulders and that psychedelic background is projected onto his white outfit.

“We have some colorful, psychedelic moments. And with our slower songs there’s less distractions and it’s not silly. It’s beautiful and powerful,” Barnes says.

He’s looking forward to getting back to SF to bring it all together, as of Montreal are set to play the Great American Music Hall tonight and tomorrow night.

“I can’t wait to go back to Great American Music Hall. It’s a beautiful venue.”