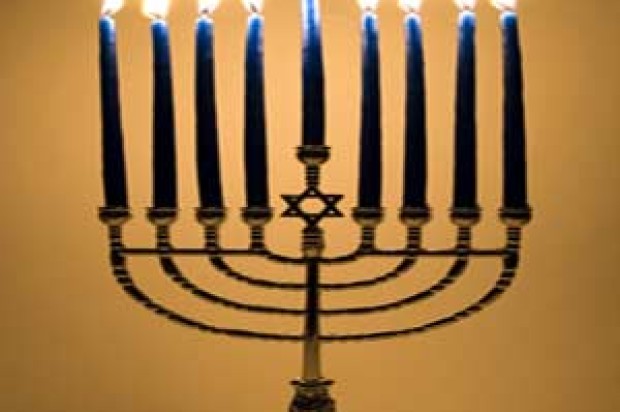 With the first day of Hanukkah and Thanksgiving coinciding for the first time in more than a century, many members of the Bay Area Jewish community are celebrating a hybrid “Thanksgivukkah” holiday.

Hanukkah, the Festival of Lights, begins tonight at sundown and a giant, nearly 20-foot-tall menorah at San Francisco’s Union Square will be lit at 5 p.m. as part of a nearly 40-decade tradition.

The Bill Graham Menorah has been shining light on San Francisco every Hanukkah since 1975 in partnership with the local Chabad organization.

Bill Graham was a Jewish San Francisco-based music promoter, who left behind a legacy of community-oriented performances and shows after his death in 1991. The Bill Graham Civic Auditorium in the city’s Civic Center neighborhood is named for him.

Event organizer Billy Cohen, who produced shows with Graham decades ago, said a whole lineup of Hanukkah events is scheduled at Union Square and beyond through the last night of the holiday on Dec. 4.

The first day of the eight-day celebration falls on Thanksgiving this year for the first time since 1888.

Cohen said “it’s kind of a fun coincidence” that creates a “good opportunity to be reflective.”

“I’m sure the Thanksgiving theme will work its way into the rabbi’s remarks,” Cohen said.

The giant menorah will be lit each night at Union Square until next week. On the last night of the holiday, Dec. 4, grand menorah lighting will take place under the fourth-floor dome nearby Westfield Shopping Centre on Market Street.

The free event, which is open to the public, features family-friendly festivities including dreidel spinning, holiday treats, arts and crafts and a performance by Jewish blues musician Saul Kaye.

In Fairfield, the Jelly Belly Factory is celebrating the first night of Hanukkah with the lighting of a giant Jelly Belly bean-filled menorah.

The menorah has been installed at the Jelly Belly visitors’ center for the fourth annual lighting ceremony, which begins at 3 p.m.

Traditional Hanukkah foods, such as potato pancake latkes, will be available for adults and children at the “Hanukkah Wonderland” display at the visitors’ center, located at 1 Jelly Belly Lane off of state Highway 12 in Fairfield.