Hundreds Cheer On Batkid Through Day Of Fighting Crime 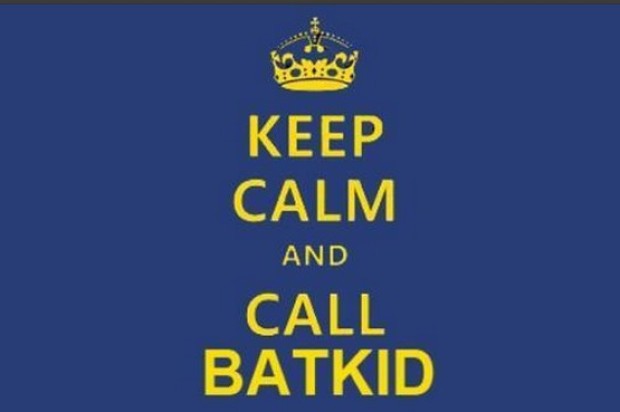 2:19 PM: Hundreds of people gathered in San Francisco’s Union Square to cheer on “Batkid” as he continues on his crime-fighting spree today.

The young superhero, known in everyday life as Miles, ate lunch at the Burger Bar inside the Macy’s building at Union Square, but then sped off on another mission to rescue San Francisco Giants mascot Lou Seal, who had been kidnapped by Batman’s rival, the Penguin.

The activities are part of the Make-a-Wish Foundation’s daylong event to grant a big wish for Miles, a young leukemia patient whose cancer is in remission. Miles wanted to be Batman.

Helicopters hovered overhead and yellow police tape helped hold back the crowds as the throngs of fans, many holding yellow and black balloons or wearing T-shirts with the Batman logo, waited for a glimpse of Batkid. Onlookers also dotted the windows of nearby apartment buildings.

Among those waiting at the entrance to Macy’s was Stan Roth, 63, owner of Stanley’s Steamers hot dogs. Roth said that even if he didn’t have a hot dog cart right in Union Square, he would still have come out for today’s events.

“I wouldn’t miss it for the world,” he said.

Roth’s 28-year-old son is a cancer survivor, and he said he thinks the project to transform San Francisco into Gotham City for Miles is “pretty special.”

“I think it just appeals to the best part of human nature,” Roth said.

Alice Leong, who is visiting San Francisco with her granddaughter from Santa Clarita, Calif., agreed.

“I’m tired of hearing all that yucky stuff on TV,” she said.

“This is the good part. This makes you feel good,” she said with a smile.

Leong said she learned of the “Batkid” plans on TV, and noted that the story even was discussed on ABC’s “Good Morning America.”

Adam Clay and Javier Villagomez, both 23, came down to San Francisco from Vallejo with their cameras this morning to catch some of the action.

“I think it’s pretty cool how everyone came out in their Batman gear,” said Clay, whose backpack has a Batman logo.

During Miles’ lunch, the Journey song “Don’t Stop Believin’” began blaring. A short time later, the Penguin drove out of the underground Union Square parking garage to boos from the crowd.

A few minutes later, Batkid himself walked out of Macy’s alongside Batman and the crowd chanted Batkid’s name as the pair paused to survey the crowd.

Batman then pointed forward and the two got into the waiting Batmobile and drove off for AT&T Park, where another adventure awaited them involving the Penguin and the kidnapped Lou Seal.

The day of events is ending this afternoon outside San Francisco City Hall, where Mayor Ed Lee will give Miles a key to the city.

12:47 PM: San Francisco has transformed into Gotham City for the day as 5-year-old Miles fights Batman’s arch rivals to fulfill his wish of becoming the famous superhero.

Miles, a kindergartener from Tulelake in Siskiyou County, was diagnosed with leukemia when he was a year old. The cancer is now in remission.

The Make-A-Wish Foundation granted the boy’s wish to become Batman for a day. As Batkid, the boy is helping Batman fight against evil throughout the city.

Around 10 a.m., San Francisco police Chief Greg Suhr called Miles to alert him to a damsel in distress tied up on the San Francisco Municipal Railway Powell-Hyde cable car line.

People cheered on the duo at Green and Hyde streets as they emerged from their Batmobiles in full costume.

The duo scrambled to save the damsel, who was facing an oncoming cable car as the crowd yelled “Go Batkid!”

Many wore clothing donning the Batman logo and held signs that read “Help Us Batkid!”

The pair untied the damsel from a green box filled with question marks from the “The Riddler” and continued on to stop the villain from robbing a bank vault at 550 Montgomery St.

Sacramento resident Jessica Harris came from Sacramento on Thursday night to watch the rescue with her son Matthew, who turns four later this month.

Harris said Matthew is also a Batman fan and has been counting down the days until their trip to San Francisco.

“It’s kind of bittersweet. It’s exciting that they’re doing this for (Miles’ family),” she said.

San Francisco resident Jesse Garcia came to watch the spectacle that was only three blocks away from his home and said it was great to see the community come out to support Miles.

Miles will have lunch around 12:30 p.m. at the Burger Bar overlooking Union Square and a flash mob will perform to Journey’s “Don’t Stop Believin’.”

The group will then tell Miles that San Francisco Giants mascot Lou Seal has been kidnapped by Batman’s other rival “The Penguin” and the boy will go to rescue him inside AT&T Park.

Miles will then head to City Hall and receive a key to the city from San Francisco Mayor Ed Lee at 2 p.m.