Appealing TV: The League, Nikita, The 50th Anniversaries of the JFK Assassination, and Doctor Who. Coincidence? I Think Not. 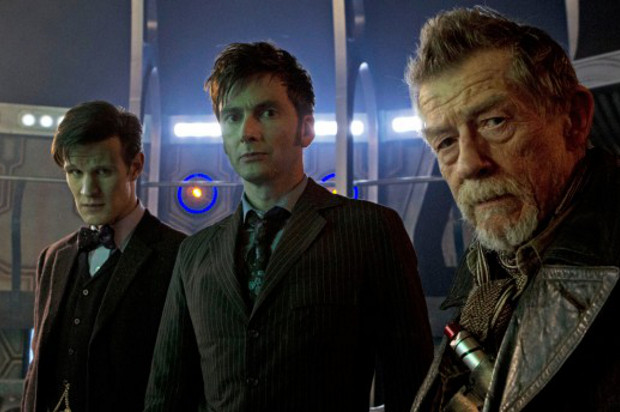 Good Lord, November is a hotbed for time-based milestones! We’ve already had the twentieth anniversaries of the Food Network, the Ultimate Fighting Championship, and the release of Wu-Tang Clan’s Enter the Wu-Tang (36 Chambers). And this week we are celebrating the 50th anniversaries of the assassination of JFK and the premiere of Doctor Who. Which means prepare to get bombarded with retrospective specials for the both of ’em! I will be celebrating this week by watching Oliver Stone’s JFK on mute while listening to the iconic TARDIS woosh sound on loop and telling myself that JFK is really a companion of the Doctor and stopped the Daleks, who were REALLY behind his assassination. Do you know what letters AREN’T in the word ‘exterminate?’ J. F. K. It all makes sense now.

Monday, November 18
The Science of Doctor Who with Brian Cox (10pm, BBC America)
THe only way we’re going to relate to kids nowadays is to put everything in Doctor Who terms. The reboot of Stand and Deliver is really about an idealistic Whovian who teaches inner city kids calculus by getting them into Doctor Who. Professor Brian Cox leads viewersinto the science of Doctor Who, and whether or not we’re going to all be using sonic screwdrivers in ten years.

Tuesday, November 19
David Blaine: Real or Magic (9:30pm, ABC)
Hey, people like magic, and people like celebrities! Why don’t we put the two together and watch magic (pun intended) unfold? Here are Breaking Bad’s Bryan Cranston and Aaron Paul (if we don’t stop talking about Breaking Bad, it never really ended, right?) getting their minds blown with an illusion from David Blaine.

Wednesday, November 20
The League (10:00pm, FXX, season finale)
The League ends its run tonight with two episodes back to back. Get in the Hanukkah spirit early, as the season finale episode is titled The 8 Defensive Points of Hanukkah.

Thursday, November 21
24/7: Pacquiao/Rios (10pm, HBO, season finale)
The 24/7 lead-up series featuring Manny Paciquao’s and Brandon Rios’s preparations (not to mention’s Liev Schreiber voice) for their fight this Saturday in Macau. While Paciquao did mention he will be dedicating this fight to the victims of Typhoon Haiyan, which struck the Philippines on November 8, it feels a little dissonant as I mention that in the context of a boxing match. So here’s a link to donate (By way of Doctors Without Borders) if you haven’t already.

Friday, November 22
JFK: Assassination the Definitive Guide (8pm, History)
Just because a channel called History largely shows slack-jawed yokels trying to pawn off table legs they claim are from the Civil War for an absurd amount of cash doesn’t mean that it can’t show anything of historical significance. Enter JFK: Assassination the Definitive Guide. With a name like that, best believe we can put all the conspiracies to rest after it airs. History channel comes out on top, and Pawn Stars gets renewed for twenty more years.

Nikita (9pm, The CW, season premiere)
The fourth and final season of the sexy spy drama starring Maggie Q (Mission Impossible III) on The CW. It is impossible to write about any CW show without using the word ‘sexy’ in it. You try it. Also, if you are wondering, yes this is a loose re-interpretation of USA Network’s La Femme Nikita which ran from 1997 to 2001, which was based on the 1990 Luc Besson film, Nikita.

Saturday, November 23
Doctor Who 50th Anniversary Special (11:50pm, BBC America)
No telling if the 50th Anniversary Special of Doctor Who, entitled Day of the Doctor, will feature characters in Doctor Who themed Día de Muertos face paint. Because that just sounds awful and racebait-y. What I can tell you that Matt Smith and David Tennant, the eleventh and tenth Doctors, respectively, will join forces. John Hurt and former companion Billie Piper will also appear. Also, note the time! They will be simulcasting this, so no need to preemptively torrent this before the domestic air date.

Sunday, November 24
American Music Awards (8pm, ABC)
Has the American Music Awards shown up to act as synergy with another ABC show that I watch? No? Then, I don’t care. Point, CMA Awards and Nashville. What’s music anyway? Is that the stuff they put on before podcasts begin?

Ja’mie: Private School Girl
Chris Lilley, who brought us the amazing Summer Heights High, Angry Boys, and We Can Be Heroes gives up Ja’mie, spoiled private school girl featured in Summer Heights High and We Can Be Heroes her own spin-off miniseries. For those not familiar with Chris Lilley’s work, expect with Ja’mie: Private School Girl to have a grown man play an Australian teenage girl, and have no one else be the wiser.