Appealing TV: Mike & Molly, The Greatest Event in Television History III, and They Give Awards For That? 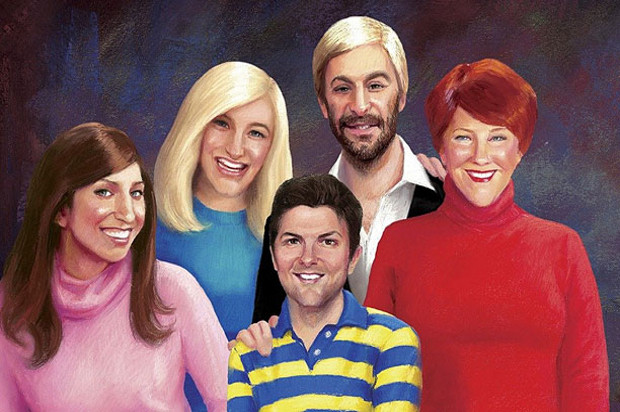 We are weeks removed from the new shiny of this television season, the glut of holiday themed programs is just beginning, and we’re a couple of months out from television midseason. That means a no-man’s land of award shows, retrospectives, and specials.

Mike & Molly (9pm, CBS, season premiere)
Hot off the heels of last week’s season finale of My Big Fat Revenge comes the season premiere of the CBS sitcom about two overweight people who fall in love after meeting at an Overeaters Anonymous meeting. It is also salient that we are only a couple of weeks removed after star Melissa McCarthy’s Elle Magazine Cover Jacketgate. What up fat shame, why not have a show featuring nothing but b-roll of overweight people with their heads positioned out of frame, as used on news shows when reporting on obesity.

Tuesday, November 5
Moonshiners (9pm, Discovery, season premiere)
It took the Discovery reality series focused on moonshiners three seasons in order to name an episode ‘Time to Shine.’ In their defense, they were probably burning through the idioms for ‘shine’ listed on The Free Dictionary for episode titles.

Fighting for a Generation: 20 Years of the UFC (9pm, Fox Sports 1)
Along with Magic: The Gathering and Food Network (see below), the UFC turns twenty this year. This documentary revisits the first twenty years of the UFC’s existence. The documentary features current and former UFC fighters, David Spade, and John McCain, who in 1998 made his infamous ‘human cockfighting’ comparison during the UFC’s (and MMA’s) dark age. While having McCain appear and recant his statement makes sense, it feels a little like if somebody made a documentary about my life and the producers looked for the kids who bullied me in elementary school, just to cajole them into saying how cool I am on-camera now.

Wednesday, November 6
The 47th Annual CMA Awards (8pm, ABC)
The most I’ve ever exposed myself to the CMA Awards would be through ABC’s Nashville. So, slow clap ABC/CMA for the cross promotional bump in awareness. But really, I’m thanking Connie Britton for having me think more about the CMA Awards than I ever have.

Thursday, November 7
Inside the Actors Studio (7pm, Bravo)
I can’t be the only one who didn’t know Inside the Actors Studio was still on the air, right? I suppose the show gets lost in the muck and mire of navigating which city housewives will be featured in, and figuring out which chef gets on top. The cast of Arrested Development appear, and one can only hope that a staging of New Warden, the screenplay written by James Lipton’s Warden Stefan Gentles will be staged. I heard the staged reading with elementary school children was “very well received.”

Does Andy Cohen host the Inside the Actors Studio after show?

The Greatest Event in Television History Part 3(11:59pm, Adult Swim)
Does this invalidate the past two Greatest Event in Television Histories? The last event occurred seven months ago with a shot-for-shot remake of the Hart to Hart opening credits starring Amy Poelher, Horatio Sanz, and Adam Scott. And before that, last year, with a shot-for-shot remake of Simon and Simon with Jon Hamm.

Well, to quote The Doctor: “People assume that time is a strict progression of cause to effect, but actually, from a non-linear, non-subjective viewpoint, it’s more like a big ball of wibbly-wobbly…timey-wimey…stuff.”

Friday, November 8
Pete’s Christmas (8pm, Hallmark)
Hallmark Channel is first out of the gate with its own saccharine Christmas telefilm, only eight days removed from Halloween. So it begins, everybody. So it begins.

I’m sure they’ll tell the story about how Mario Batali dunked his injured hand in a bowl of tomatoes while livetaping a show during the early, bad old days. But Jesus Christ, get over yourselves already.

Miss Universe (9pm, NBC)
I’m waiting for Miss Multiverse, myself. Which I would imagine would just be like Jet Li’s “The One” only in pageant form. Which makes me wonder, would a win for the contestant also carry ramifications for the universe they hail from? Until that happens, I’ll be waiting for Steven Tyler’s (who will be judging and performing) Miss Universe viral gaffes to show up on The Soup next week.

Sunday, November 10
2013 MTV EMA (6:30pm, MTV)
In my head, the MTV European Music Awards is just a two hour tribute to Robyn. And if there is any justice in the world, that’s what it will be.

The Britannia Awards 2013 (9pm, BBC America)
Comedian Rob Brydon hosts what looks like a classier version of the Golden Globes, where the winners are already announced. So there’s no pressure to project your own self-worth on celebrities who are nominated for an award and don’t win.