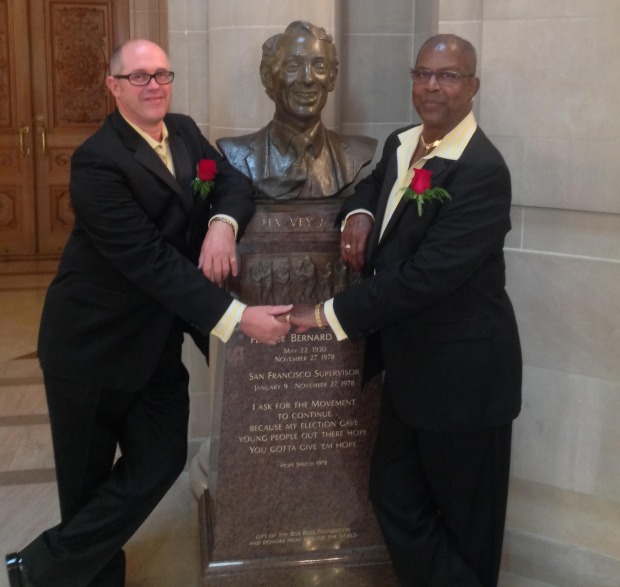 James Wright and Albert Patterson, who got married at San Francisco City Hall on 11-12-13, pose in front of a bust of Harvey Milk.
PHOTO BY RON SCHAER, COURTESY OF WRIGHT AND PATTERSON

It was hard not to miss the black suits and white dresses at San Francisco City Hall as couples exchanged vows today to mark their union on 11-12-13.

About 35 ceremonies were performed today to mark the second to last sequential date of the century, according to the San Francisco county clerk’s office.

Albert Patterson and James Wright married in a ceremony attended by close friends in front of the Harvey Milk statue.

The wedding was held at 2 p.m., which is 1400 hours in military time, to make the date more special.

Standing side by side in matching black suits and yellow collared shirts they laughed when recalling how they planned the ceremony without knowing it was a sequential date or that it would fall on Patterson’s 67th birthday.

Mila Flores stood on the second floor in her floor-length white wedding dress overlooking the City Hall Rotunda waiting for her soon-to-be husband Nestor to arrive for their 3 p.m. ceremony.

The couple chose the date because it was “easy to remember” and a date that wouldn’t come around again, she said.

They are also expecting a baby in March and wanted to schedule their nuptials as soon as possible, she said.

Daniell Smith and Joanne Kurtz Paris Smith were all smiles after their 2:30 p.m. nuptials in front of the Board of Supervisors chambers.

The couple said they met 18 years ago and stayed together until circumstances got in the way. They reconnected two years ago and got married today.

Daniell proposed to Joanne on May 1 and knew he wanted to get married on the consecutive date since it ends with “the lucky 13.”

Lauren Nishida and Alex Sutkin of Redwood City were waiting outside of the county clerk’s office for a 2:30 p.m. ceremony that was yet to begin.

Today’s date coincides with their relationship history. They met in 2011, got engaged in 2012 and are getting married in 2013.

The calendars for a specific date opens 90 days beforehand and Nishida remembered waking up at 6 a.m. to snag one of the first spots.

The couple’s parents and grandparents were at today’s ceremony and will hold an additional ceremony in Hawaii on New Year’s Eve.