The other night I went to Kate Mitchell’s Fashioning Women. It was a performance of mostly dancing, some singing and a short spoken piece, where the performers wore Mitchell’s faux-couture clothing creations.

The email about the show said that it was intended to be “a sendup and dressing down of the fashion industry,” so I got excited. I love love love goofing around with the standard idea of female beauty.

When I got to SOMArts on Brannan, I was surprised by how packed it was. I even had to wait a little to get a good view of the art on display. It’s a big space so I was happy to see that many people turn out for an art performance.

The art was a collection of collages. Ms. Mitchell deconstructs articles of clothing and combines them with mixed media in order to call attention to the contradictory messages that women are given by society.

I didn’t really get contradiction from her pieces, which included a bejeweled hairdryer for $6000, but here is one of pieces that were on display. Maybe you’ll see it? 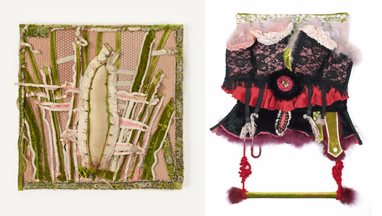 You can see more of her collages here.

The 35 minute performance began to a standing room audience. In the first piece, women came out wearing vintage robes and danced while stripping down to just bras and adult diapers.

Then there was a short spoken piece where women who had been seated in the audience stood in a line and had clichéd directions on how to stand and how to behave shouted at them by the host, a young male.

This was followed by a cheeky song about the various roles women are told to play (sweetheart, whore, mother…). The remaining two numbers were women dancing in Mitchell’s fashion creations.

I was surprised that the show was so…traditionally pleasing, visually. It was basically women with model’s bodies, wearing pleasing clothing, while performing beautiful movements.

In something intended to be a “send up and take down” of the fashion industry, it seemed out of place that all the performers would have the bodies of fashion models. I know that professional dancers are often thin (not just because of the requirements of the job but also because women of different body types are weeded out early in the training) but there are many women with average builds out there, doing strenuous dancing.

For example, a whole group of average women danced on the Rick Owens Spring 2014 runway:

And while Ms. Mitchell’s faux couture pieces were unusual for street wear, they didn’t go any further than what you see on a fashion industry runway by designers like Comme des Garcons. 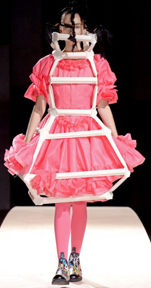 For me, Fashioning Women felt like it perpetuated the pleasing behavior that society tells women they must exhibit. It is a problem that women are told to constantly be pleasing, but the performance didn’t do more for me than illustrate a problem I consider to be well known.

I wanted to see the “take down” of the fashion industry that was promised. I started wondering what that might look like.

Here are some ideas I came up with:

— The same 35 minutes filled only by a woman wearing a wedding gown, dragging herself across a floor. (This would be a take down of the most normal notion of what it is to be a bride.)

— A performance of women wearing intentionally unflattering clothes performing purposefully ugly dance movements. (This takes down the notion of a woman being presentable only if she’s pleasing.)

— A fashion show that’s just a cocktail party, where no one is told who the models are and the designer just has to believe that the clothing they’ve created is interesting enough to make people ask someone about what they’re wearing. (If you take the fashion down from the stage, does it still have an impact?)

Though Fashioning Women didn’t answer, or raise, any questions for me, it did encourage me to come up with some questions myself. So, for me, Fashioning Women was an inspiring experience and I plan to see more of Ms. Mitchell’s work.