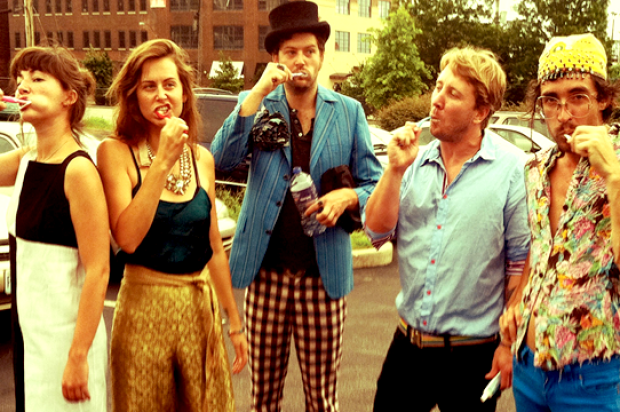 With just a week to go until Halloween and the conclusion of what is commonly referred to as Rocktober, the urge to dress up and throw down is only amplified. You’ve got a kindred spirit in Los Angeles quintet He’s My Brother She’s My Sister. Think of them as a new type of family band steeped in the rich sounds of folk, waltzing alongside classic stage productions and the type of theatrical background that makes their tap dancing drummer Lauren Brown less a curiosity and more a necessary part of the band’s percussion.

“I get so much joy doing it, both tap dancing and drumming, that I hope that joy spreads to the audience,” Brown tells the Appeal.

“I also think it helps get folks loose right off the bat and dancing early, cause if I am already doing it and looking like a big weirdo, there is less of a chance of someone in the audience being embarrassed for letting go and cutting it.”

He’s My Brother She’s My Sister is one of the few acts out there who can claim their moniker in earnestness. The band was started by brother and sister Rob and Rachel Kolar, who soon expanded their lineup to, as per their oft-cited bio, “a friend, a landlord, and a girlfriend.”

Familial ties aside, what binds the group is an infectious energy that gets the masses moving at even the most stoic and cramped of venues. Singer and guitarist Rob Kolar attributes not only their music but attire and aesthetic to the spell they cast on their fans, which in turn informed their debut album, Nobody Dances in This Town.

“Some people probably think we are trying hard by wearing these outfits and having so much stage energy but the truth is that is just who we are and what we love. The title actually came from sweaty fans all around the country who had just torn up the dance floor and would come to us after and say, ‘…that was so fun. Nobody dances in this town,'” Kolar explains.

The band is set to play the Independent this Friday, one of many stops on their fall headlining tour. Two new songs have been kicking around the country as HMBSMS looks towards the future, setting their sights on the studio. Given the time of year, expect even more outlandish outfits and bravado from the Kolars and co.

“Rachel and Lauren have some amazing dresses (some with sequins, tassels, etc),” Kolar explains. “[Double-bassist] Oliver will often strip down to only his underwear. I have my staple top hat (which was recently stolen in Colorado and mysteriously returned in Arizona). [Guitarist] Ryan goes for the self-proclaimed ’80s dad look which we find very welcoming. We do sometimes bring out masks or makeup to enhance the shows. Especially around Halloween time.”