Some Kind of Wonderful: Beautiful: The Carole King Musical 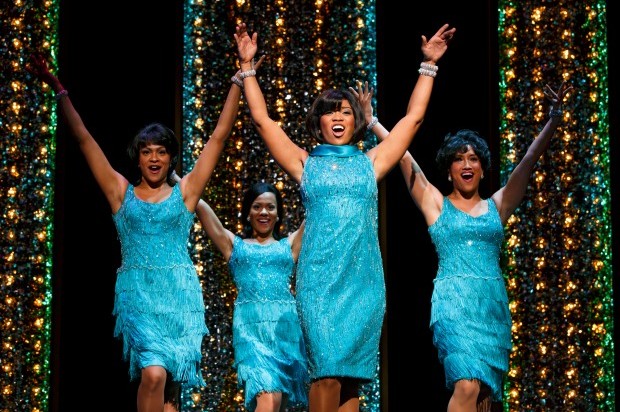 Beautiful: The Carole King Musical is, as the title would suggest, about Carole King, the singer and songwriter whose career began as a teenage songwriter, and pinnacled with the release of her 1971 solo album that ended up staying on the charts longer than any other female artist in history, (a record she held until 1993, when it was broken by Whitney Houston and the soundtrack to The Bodyguard).

Carole King’s story works so well as a jukebox musical, it’s a surprise it’s taken this long to happen. (Although fictionalized versions of her story have appeared in two movies I know and love: 1978’s American Hot Wax–in which the teenage songwriter is played by Laraine Newman–and the excellent 1996 release Grace of My Heart, starring Illeanna Douglas.) Of course, Carole King had a lot to do with the hold-up, as it’s really her story to tell. But perhaps her releasing an autobiography earlier this year had something to do with her decision to give the musical her blessing.

Luckily, it’s a great piece of entertainment, and definitely a must-see for Carole King fans, as well as fans of 1960’s rock and pop. Because even though the title suggests it’s all about her, she’s actually just the lead in an entertaining ensemble.

Framed by King’s 1971 Carnegie Hall appearance, the musical opens with a long-haired King, (played eerily well by Tony-nominated Jessie Mueller), performing “Home Again” at a grand piano, and then jumps back in time to 1959, when she was a pony-tailed sixteen-year-old Brooklyn college student (she skipped some grades) and aspiring songwriter. She ventures to the Brill Building in New York, and convinces producer Don Kirshner (an amusing Jeb Brown) to buy a song (“It Might as Well Rain Until September”) and release it as a single. But what he really wants is for her to write songs for other artists…

At school she meets cute with fellow student and aspiring playwright Gerry Goffin (Jake Epstein), and they decide to collaborate on some songs, starting with “Some Kind of Wonderful” for the Drifters, and eventually scoring a huge hit for the Shirelles with “Will You Still Love Me Tomorrow?”

This particular collaboration is one of the highlights of the show, with King and Goffin composing and singing on a piano, then trying to convince the Shirelles to perform it. Which they eventually do, in a moment I still can’t quite believe: as the singers walk across the stage in normal everyday wear, they pass behind a lit-up backdrop, and reemerge, seconds later, in a complete costume change of glittery pink cocktail dresses with chiffon shoulder sashes. I wanted to give the costume designer a standing ovation for that one.

Several numbers are set up this way, seeing the composers writing the songs, and the finished products performed by musical acts representing the Drifters, the Chiffons, and the Righteous Brothers. All these performances are well choreographed and excellently mimicked, although the beautiful simplicity of the original arrangements is set aside several times for grander theatricality.

But King and Goffin aren’t the only songwriters in the story. Before long, they are joined by Cynthia Weill and Barry Mann, (Anika Larsen and Jarod Spector, both excellent), another songwriting pair, and their friendship and friendly rivalry results in the two teams writing some of the best pop songs of the decade. (Seriously. Check out the show’s song list.)

Of course, it’s not all hit pop songs and Pleasant Valley Sundays. Carole and Gerry, facing a pregnancy, decide to get married, which, for a while, works out for them, even scoring them another hit when they get their babysitter Little Eva to perform their song “Locomotion.” But bourgeois married life is not to Gerry’s liking, and soon he begins to stray. Eventually he has an all-out emotional breakdown, forcing Carole to face life on her own.

The show is broken up into two acts, roughly based around Carole’s life with Gerry, and without him. The show’s biggest fault is that the second act, which actually follows King’s biggest success, is given short shrift, and seems a bit rushed through. This might be because presenting her solo songs doesn’t have quite the entertainment factor of her previous hit-making career since they are, well, solo songs. But keep in mind the show is getting its preview run here in San Francisco, before making its Broadway debut, and I imagine some of these pacing kinks may be worked out in the future.

Despite its faults, it’s an entertaining, surprisingly funny musical that will likely have you humming the music for days, all while marveling, “I can’t believe she wrote all of those amazing songs!”