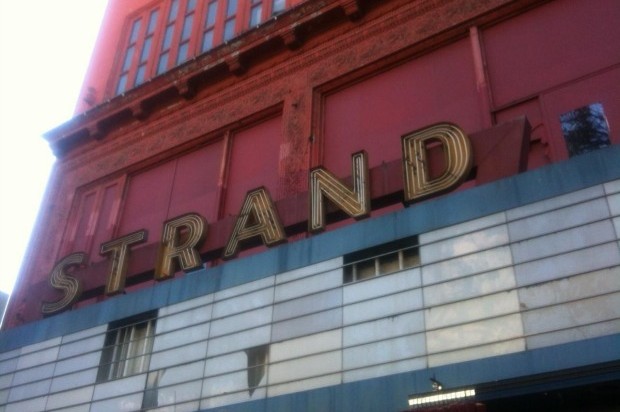 The future home of the American Conservatory Theater’s second main stage in San Francisco, the Strand Theater, was unveiled in the city’s Mid-Market neighborhood this morning.

The Strand, a former movie house built in 1917, has stood derelict at 1127 Market St. across from UN Plaza, but in the coming months will undergo a transformation, San Francisco Mayor Ed Lee said this morning at the theater’s “groundbreaking” ceremony.

The renovated theater is scheduled to open in Spring 2015 and offer a 300-seat space along with a 120-seat black box theater and café.

The A.C.T. Geary Theater showcases several plays each year in the Union Square area and will complement the additional performing arts space.

Lee called the Strand renovation plans “transformative for this whole corridor” and lauded the local theater company for investing in the Mid-Market neighborhood.

Tech giant Twitter recently moved into a building two blocks north on Market Street, but Lee said the company did not “revitalize Market Street,” instead he credited grassroots arts organizations, such as A.C.T.

Lee harkened back to his college days when he was involved in drama and performed in the Leonard Gershe play “Butterflies Are Free.”

A.C.T. board president Jeff Ubben, along with the theater’s artistic director Carey Perloff and executive director Elllen Richard, announced a $32.6 million renovation and fundraising campaign to open the space.

Kim, whose district encompasses the Mid-Market area, said the new theater will bring back the old building that has gone unnoticed for years.

“Folks will realize the jewel we’ve always had here,” she said.