Jimmy Carter In Oakland: It’s “a basic human right to have a decent place to live” 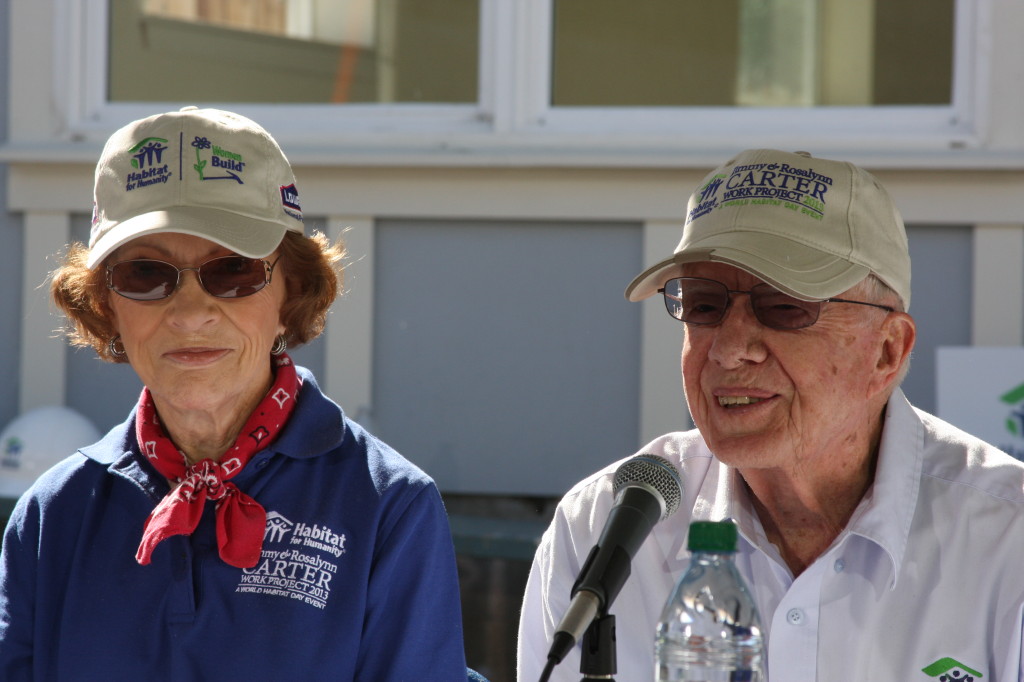 Former President Jimmy Carter stressed the importance of low-cost affordable housing in a working visit at a housing development in East Oakland today.

Speaking to reporters during a break to his visit to the 12-unit Brookfield Court project at 9507 Edes Ave., Carter, 89, said it’s “a basic human right to have a decent place to live” and he and his wife Rosalynn have been working with Habitat for Humanity for 30 years to try to make that possible.

Carter, who was dressed in blue jeans, a light blue shirt, a white baseball cap and tennis shoes, said having a good place to live gives people dignity and self-respect, keeps them off the streets and makes it less likely that they will commit crimes.

Good housing “improves the quality of life for everyone,” said Carter, who helped fit frames around windows and window sills.

The Carters came to Oakland as part of the Jimmy & Rosalynn Work Project, an annual one-week effort in which they join with other Habitat for Humanity volunteers to help build houses and raise awareness of the need for affordable housing in breaking the cycle of poverty.

Joined by singers Garth Brooks and Trisha Yearwood, they will also help renovate two homes in East San Jose on Tuesday and then move on to Denver, New York City and Union Beach, N.J., later this week. 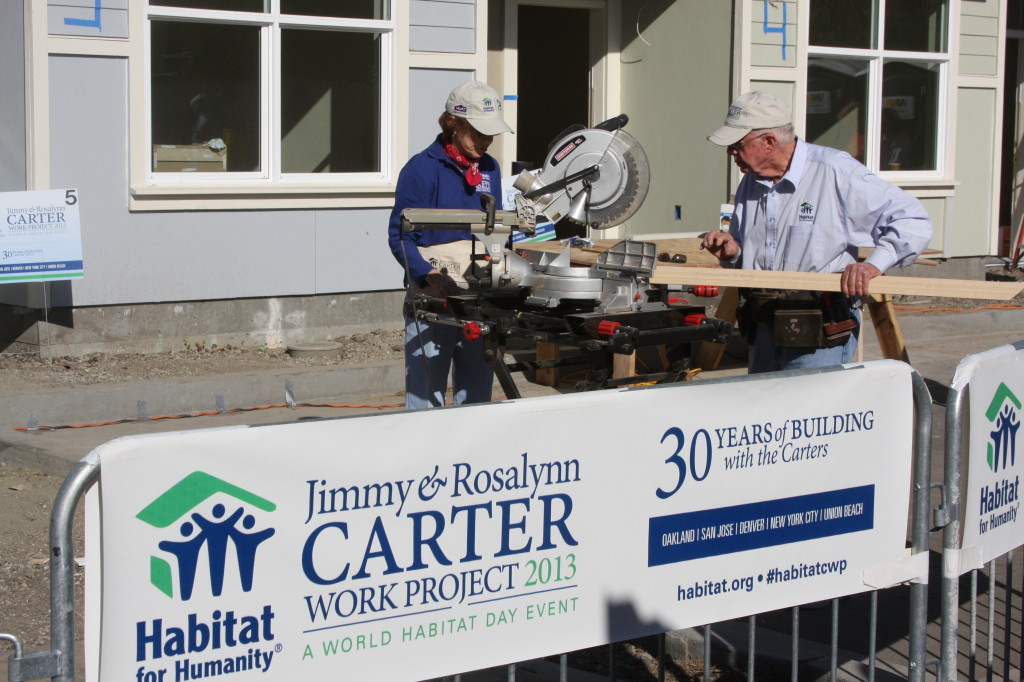 Habitat for Humanity officials say the Carters and an estimated 3,000 other volunteers will build, renovate or repair more than 80 homes this week.

In addition to building new townhouses at Brookfield Court in Oakland, Habitat for Humanity volunteers are repairing eight homes in the adjacent Brookfield Village neighborhood and making improvements at the nearby Bill Patterson Park.

An eight-person crew working at the Brookfield Court site was robbed at gunpoint last Tuesday afternoon. A shot was fired during the robbery but no one was hit, a Habitat for Humanity spokeswoman said.

Carter said the robbery was “despicable” but he doesn’t think it will happen again at the development because there’s been “a general rising up against that crime.”

He said, “There was such an adverse reaction it’s not likely to be repeated.”

Parts of East Oakland have the city’s highest crime rate, but Carter said he thinks the Brookfield Court development is alluring.

“This is an extremely attractive place,” Carter said. “I wouldn’t mind living here myself.”

Carter said, “This is by far superior in quality and income level” to many other places where he and Rosalynn have worked, such as places in Denver and New York City that he described as “more poverty-stricken and needy than this.”

The former president emphasized that people who live in homes built or renovated by Habitat for Humanity volunteers “are not recipients of anything.” 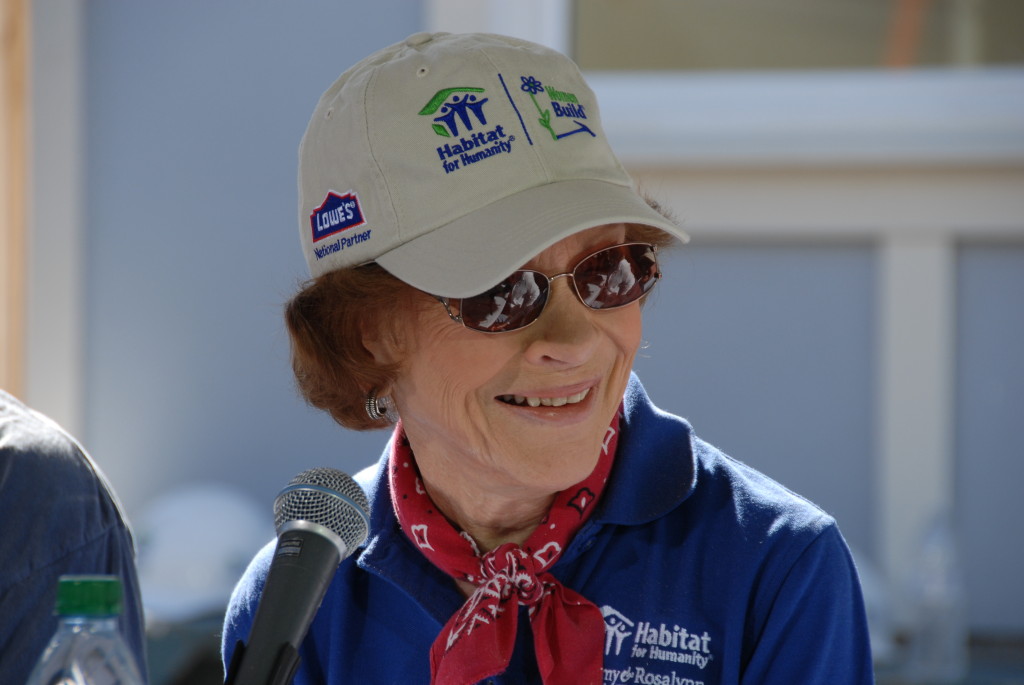 He said, “They pay full price” for the house they will live in and also put in 500 hours of sweat equity into building or repairing it.

Carter said those requirements “gives a sense of self worth and dignity and self respect because it’s a partnership rather than a handout.”

Carter said building and repairing homes is “kind of a vacation for us every year” even though the work is hard.
“We get more out of it than we put into it,” he said. 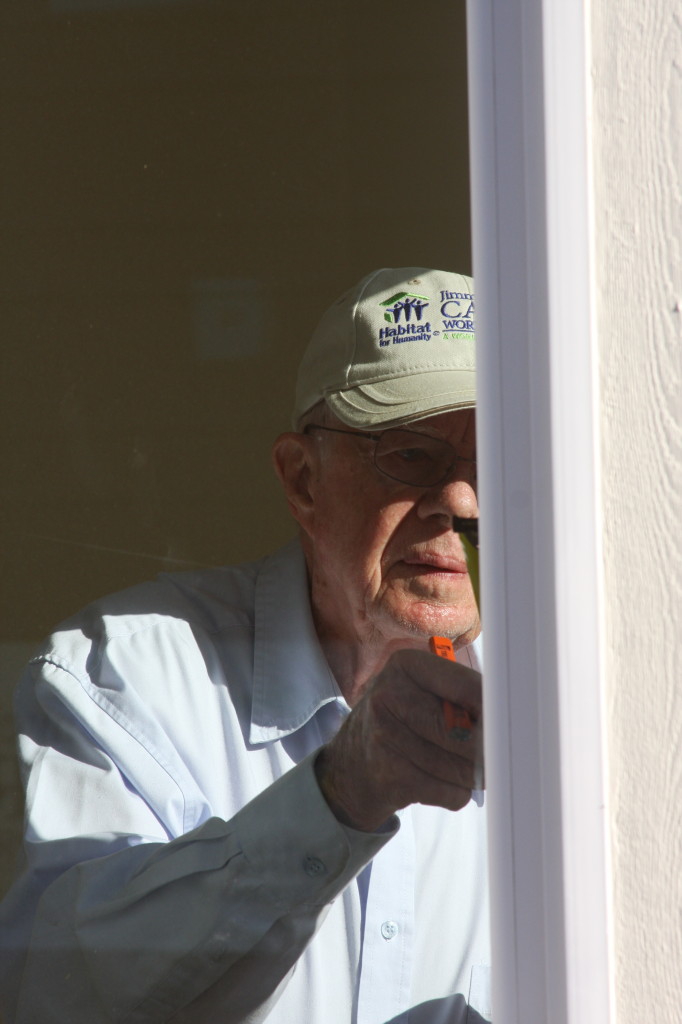