For The Fans: The Wizard of Oz 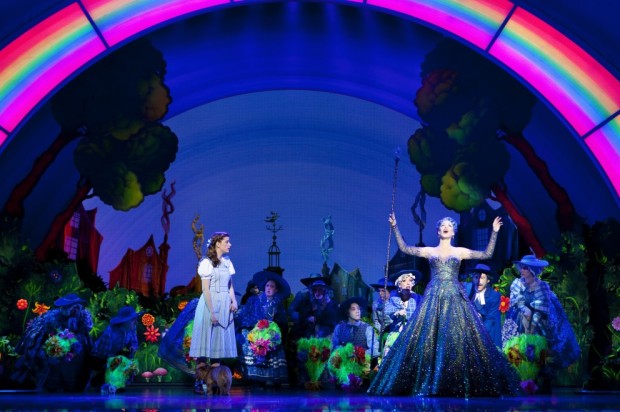 In the past three weeks, I’ve gone to see three live musicals, which, for someone who isn’t exactly musical theater’s biggest fan, is a lot. One of these reminded me why I don’t tend to like musicals, (see: Carrie); another surprised me by how enjoyable it was, (see: Beautiful); and the latest made me ponder whether it’s something only true musical fanatics can love.

That musical is The Wizard of Oz, a revamped version adapted by Andrew Lloyd Weber. Unlike the recent movie Oz the Great and Powerful, which was essentially a prequel, but couldn’t use anything featured in the 1939 movie that wasn’t also in the book, this musical is basically the 1939 movie put to stage. Most of the original songs are retained, with the addition of a few new compositions.

One of those additional songs starts off the show, with Dorothy lamenting that “Nobody Understands Me.” As a song, it’s not too memorable, and made me wonder why the team of Weber and Tim Rice–together for the first time since 1986’s Evita–were so heralded in the first place. But it does give lead Danielle Wade something to sing before launching into “Somewhere Over the Rainbow.” (Because really, you kind of have to prove yourself a bit before tackling such an iconic song.)

The first act isn’t very subtle when it comes to all the things and people that will soon be transformed into the land and characters of Oz, but I guess you don’t really look to musicals for subtlety. Dorothy runs away from the farm, meets the Wizard Professor Marvel (Cedric Smith), and returns home just in time to be swept up into that twister and carried into the Technicolor land of Oz.

I was looking forward to seeing how they’d handle that tornado, and was a bit disappointed to see the whole effect projected onto a screen that lowers in front of the stage. In fact, most of the trickier effects scenes are handled this way, which is a bit of a letdown.

Once Dorothy gets to Oz, the set turns colorful, almost garishly so. Glinda’s entrance is probably one of the show’s best moments, and man alive but I wish I could get a copy of her dress. Aside from Dorothy’s blue gingham dress, most of the costumes and character designs differ vastly from the film. The aforementioned Glinda (Robin Evan Willis) is decked in shades of blue and grey, not pink, and the Wicked Witch of the West (Jacquelyn Piro Donovan) is far vampier (and leggier) than her Margaret Hamilton counterpart. And the Munchkins? Well, they’re far less…munchkiny.

Of Dorothy’s three traveling companions–the Scarecrow (Jamie McKnight), the Tin Man (Mike Jackson), and the Cowardly Lion (Lee MacDougall)–the Scarecrow probably gets the most laughs, playing up the fact that he doesn’t have a brain with line deliveries like “I HAVE AN IDEA NOPE GONE!” Falling close behind is the Lion, although the number of gay jokes tossed in is either total pandering or just plain overkill.

Getting back to Danielle Wade’s Dorothy, she’s very good, and I can see why she won the role on that Canadian reality show. She gives her performance enough call-back to Judy Garland without coming across as nothing but imitation; she’s got some of the Garland mannerisms and tics down, and knows when to use them for comedic effect. And she’s really, really good with Toto.

Did I mention there’s an actual dog that plays Toto? And he’s a cairn terrier, just like the original Toto? And he’s amazing? And that I couldn’t take my eyes off of him whenever he was on stage?

Although when you’re watching a stage show that features melting witches, flying monkeys, and a few of the most memorable songs ever written, I’m not sure being enraptured by a dog who’s sitting still–LIKEAGOODBOY!–is such a good thing.

The Wizard of Oz plays at SHN’s Orpheum Theatre through October 27, tickets are here.