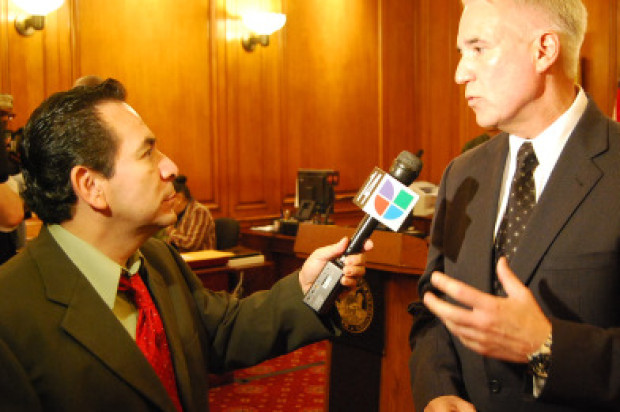 San Francisco prosecutors and other domestic violence victim advocates held an annual awareness event on Wednesday to highlight the different forms abuse can take and ways to empower survivors.

Assistant District Attorney Marshall Khine, who oversees the domestic violence unit for the district attorney’s office, said more prosecutors and other resources have been added to the unit in recent years, and it now represents the largest division in the office.

Khine said prosecutors have started taking a broader approach to the problem, looking at crimes like vandalism and animal abuse as possible forms of domestic violence.

Animal abuse “can be used as control over our survivors,” while slashing tires or damaging other property leaves victims “so they never feel safe,” he said.

Maria Bee, chief of victim services for the district attorney’s office, said the services provided by her office and local nonprofits “enable women to leave these abusive relationships.”

Bee said the services include counseling and workforce training to help victims deal with financial worries, which she said are often “the strongest and most immediate deterrent from leaving.”

Lindsay Sweetnam is a program manager with La Casa de las Madres, which offers a 24-hour crisis hotline and other support services, said economic abuse can include preventing women from having access to their finances.

Patricia Barragan, a domestic violence victim advocate for the district attorney’s office, encouraged women to have a “go bag” ready that includes important documents, toiletries and any other vital items if they think they might have to leave a dangerous domestic situation.

She said the office handled 1,126 survivors in the city last year, and has begun holding office hours out in the community rather than forcing people to come to the courthouse at 850 Bryant St.

More information about the services offered by the district attorney’s office can be found by calling (415) 553-9044 or by visiting www.sfdistrictattorney.org.