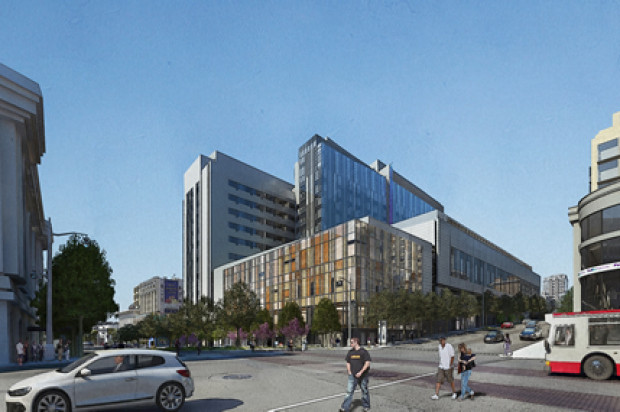 The demolition of the old Cathedral Hill Hotel in San Francisco is under way so a new California Pacific Medical Center hospital can be built at the site—the culmination of years of negotiations between city and hospital officials over the project.

Mayor Ed Lee joined CPMC chief executive officer Warren Browner and others at a ceremony this morning to celebrate the milestone. Work to remove the shuttered hotel at Van Ness Avenue and Geary Boulevard began last month and will include a public demolition in a couple weeks.

The mayor in July approved plans for the new hospital—which will hold up to 304 beds—as well as plans for a new 120-bed hospital at CPMC’s existing St. Luke’s campus in the Mission District.

“This is a day we’ve looked forward to for a long time,” Lee said.

A previous development agreement drawn up last year between the mayor’s office and CPMC officials included plans for a smaller hospital at St. Luke’s and a larger one at Cathedral Hill.

But members of the city’s Board of Supervisors shelved the deal, in part because of concerns over an escape clause that could have let CPMC close the St. Luke’s hospital if its operating margin stayed negative for two straight years.

A new deal was hashed out earlier this year that omitted the escape clause, included higher contributions by the hospital group to the city for charity care, and required that at least 30 percent of those hired for construction jobs be San Francisco residents.

“I was reminded of the story of the little boy who bangs his head against the wall, and his mom comes up and asks why he’s doing that, and he says ‘It feels so good when I stop,’” Browner said. “It feels good to no longer have a callus on my forehead.”

Mike Cohill, president of Sutter Health West Bay Region, which oversees the CPMC hospital system, said that with the new hospitals, CPMC “will be in position to continue meeting the medical needs of San Francisco for decades to come.”

Cohill said the Cathedral Hill hospital is expected to open by 2019, with excavation starting at the site in April after the demolition work is complete.

More information about the project can be found online at www.rebuildcpmc.org.