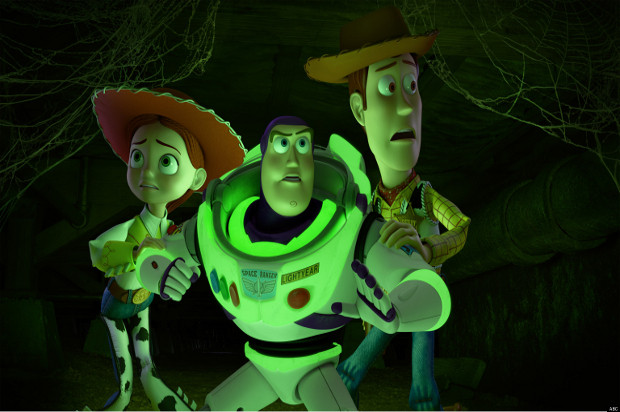 Everybody, give it up for the second canceled show of the 2013 – 2014 television season, CBS’s We Are Men. In its place will be reruns of Mike & Molly. We can only spare so many tears, as there are many more cancelations on the horizon to look forward to.

Monday, October 14
Pure Evel: American Legend (10pm, Discovery)
A documentary about the life and times of the flag wearing, helmet advocating, snake (canyon) jumping daredevil. Knievel would have been 75 on October 17. Can we just rebrand Columbus Day as Evel Knievel day? In nineteen-seventy-and-four, Knievel jumped the Canyon Snake. Still working on it. No word if the documentary will attempt to jump over 75 VHS tapes, in an allegorical stunt about the death of solid state media.

Tuesday, October 15
The Biggest Loser (8pm, NBC, season premiere)
People tweeting about watching the Biggest Loser while eating pizza was a lot of people’s first experimentation with snark and irony. It’s another season of exploitation, manipulation, and product shilling. (Think I’m being to harsh? Well, check out one stories from a past contestant detailing how they say they were mistreated while on the ranch.) So with that said, here’s a video of Ruben Studdard talking about not wanting to pass up on such an opportunity to appear on this season. Because celebrities. And because praise be to Monsanto and the our corporate masters for loading our modulated sodium blocks with corn syrup and fattening us up, so they can sell us on the low fat, gluten free alternative, which is just as processed and has as much nutritional value as the original products they shoved down our gullets to begin with.

Wednesday, October 16
Toy Story of Terror! (8pm, ABC)
In a made for TV special that actually was able to secure the voice talent from the Toy Story films (thanks, Hanks), the Pixar people actually had a hand in making this! Which means it could be great, or it could be more fodder to bemoan Pixar’s fall, and to fail to accept that all good things come to an end (just like the series finale of Star Trek: The Next Generation said). Bone up on the study of chemistry, complainers! As Walter White said, it’s the study of change. Growth, decay, transformation.

Not sure if this special is canon.

Thursday, October 17
Reign(9pm, The CW, series premiere)
I bet that in a desperate bid to connect with their students (HOW CAN I REACH THESE KIDS), a high school teacher teacher will cite Reign, a show based on Mary, Queen of Scots, during one of their classes. Much like one time I took a geography course at Laney College and the teacher spent half the class debunking what he said was scientifically inaccurate about The Day After Tomorrow. Dammit if it isn’t a golden age to be a high school teacher right now! Movie adaptations of Great Gatsby, Much Ado About Nothing this year. And there’s still the Claire Danes/Leo DiCapro Romeo and Juliet, Ten Things I Hate About You, and even Clueless.

ANYWAY, essentially, this is Game of Thrones, but with sexy teenagers. Which I do realize I am using a fair amount in describing shows on the CW.

Saturday, October 19
The White Queen (9pm, Starz, season finale)
They aren’t just miniseries anymore, they are miniseries events! Events, like watching your kid graduate high school, or placing third place in the annual Nathan’s hot dog eating contest. The White Queen (aye, where the white queens at?) focuses on the warring houses of York and Lancaster. It’s 1464 in England, before the Tudors (Showtime or otherwise) take power. More specifically, it focuses on three women and their own power plays in vying for the crown.

Sunday, October 20
Guy’s Grocery Games (8pm, Food Network, series premiere)
Richard Dawson, Peter Tomarken, Ken Ober, Chuck Woolery. Those were game show hosts. After the overproduced thought experiment Minute to Win It was canned, I’m not sure what giving him another game show, this time on his home base of the Food Network, is supposed to prove. And this isn’t even about like ‘OH HAY BRING BACK SUPERMARKET SWEEP’ but let’s bunt for the lowest common denominator. Because the meta message is that good could can be made from remodulated, overly processed blocks of sodium and corn syrup from our Monsanto overlords. But the mouth breathers this show is pandering to won’t even bother to try, because screw it.

But seriously, bring back Supermarket Sweep.

Comic Book Men (11:59pm, AMC)
Kevin Smith’s Comic Book Men reproves that despite how mainstream nerd culture is, a bunch of comic book fans can be sexist basement dwellers. Call it a throwback! Just like Pepsi made with real sugar!