Treasure Island Off-ramp Construction
The eastbound I-80 off-ramp at Treasure Island will be closed for maintenance and construction activities Wednesday, through Friday and again Sunday through Monday, September 23 from 9 p.m. to 5 a.m. each night.

Customers are advised to allow extra travel time to complete their trips.

Event participants can also go by bike. Newly painted green bike lanes are in place along The Embarcadero from North Point to Howard streets in both directions. 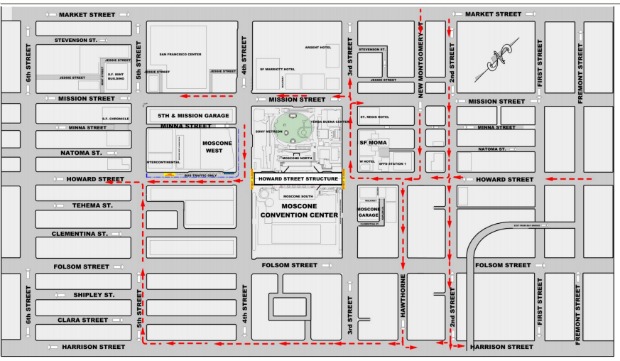 The following street closures will be required to accommodate this event:
· 8 p.m., Thursday through 1 p.m., Friday, Sept. 27
Howard Street between 3rd and 4th streets

Significant traffic congestion is anticipated in and around Moscone Center between 7 a.m. and 8 p.m. daily for the duration of the closure. Travelers are encouraged to take public transit or use alternate routes. There will be heavy pedestrian traffic in the area.

Howard Street traffic will be detoured either via 2nd Street to Harrison Street or via New Montgomery Street to Hawthorne Street, then to either Folsom or Harrison streets.

Taylor Street traffic will be detoured west on Ellis Street, north on Leavenworth Street, east on O’Farrell Street and back to Taylor.

Signage will be placed in advance of the street closures and detour routes.

Caltrans will activate message signs on major freeways entering the city to notify motorists of the closures.

SFMTA Parking Control Officers and San Francisco Police Officers will be deployed at key intersections throughout the closures.

The SFMTA will provide additional bus service on the F Market & Wharves Line before and after each event:

Polk Street will be closed between Pacific and Green streets from 2 a.m, Saturday until 11:59 p.m. on Sunday. Cross traffic will be open.

The 19 Polk Muni route will be affected.

49ers Football Game
On Sunday, the San Francisco 49ers will be hosting the Indianapolis, Colts starting at 1:25 p.m. at Candlestick Park.

Motorists should expect heavy traffic and delays on the westbound Bay Bridge and in both directions of U.S. 101 leading to Candlestick Park in the two-three hours before the start of the game. Traffic will also be congested on the eastbound Bay Bridge and in both directions of US 101 near Candlestick Park for two-three hours after the end of the game. I-280 through Daly City is a good alternate route for Peninsula drivers not attending the game. Fans attending the game are encouraged to take public transportation.

NEW NFL Bag Policy: Fans should be advised that there is a new NFL Bag Policy in effect at 49ers games. Only NFL-approved bags will be permitted inside Candlestick Park. For more information, please visit www.49ers.com/stadium/prohibited-items.html.

On game days, Muni offers several ways to get to Candlestick Park from locations throughout San Francisco. There are four Muni Express routes and two Shuttles.

All service, including the express service, is regular fare service, $2 adult per trip and $.75 for youth/senior/disabled per trip.

For faster boarding, customers are encouraged to buy their fare prior to boarding the express service. Clipper cards with either a Fast Pass or pre-loaded cash can be purchased at your convenience. Customers can load their cards online at www.clippercard.com (please allow at least five days for processing), or at one of the participating Clipper vendors or ticket vending machines in a Muni Metro station. Please go to www.sfmta.com for fare details.

79X Candlestick Express Re-route
As of last year, the southbound 79X, which provides express service to the 49ers game from downtown, will be re-routed due to Central Subway construction on Stockton and 4th streets. Customers traveling to the game can board the 79X Candlestick Express at the following locations: