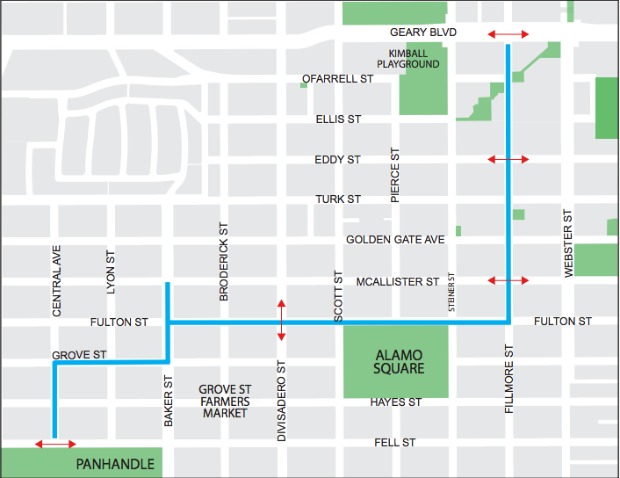 The seventh Sunday Streets event will be held this Sunday in the Western Addition. The route will connect with the Panhandle multi-use path at Central Avenue, travel through the North Panhandle neighborhood along Central Avenue, Grove Street and Baker Street to Fulton Street, where it will continue past Alamo Square Park and the iconic Painted Ladies Victorian row houses. It will then connect to the Fillmore merchant corridor from Fulton Street to Geary Boulevard. The route will be available for recreational activities from 11 a.m. to 4 p.m. The event is free to all participants.

The headquarters for the event will be located at the Panhandle on Fell Street between Central Avenue and Baker Street, where participants can get details about activities along the event route as well as free bike rentals.

Traffic will be controlled by Parking Control Officers and San Francisco police officers.

Temporary Embarcadero Cycletrack
Beginning at 6 a.m., Sunday until 9 p.m., next Sunday, Sept. 15, the right-hand travel lane of northbound The Embarcadero between Washington and Green streets will be closed temporarily for the implementation of a two-way cycletrack for the America’s Cup Finals races.

This bikeway will run between Washington Street, north of the Ferry Building, to the midblock pedestrian crossing at Pier 23, between Lombard and Green streets. The facility will provide additional capacity for bikes in the areas that are expected to experience the greatest number of visitors to the America’s Cup events.

Police barricades will be used for the cycletrack. There will be gaps at each intersection and midblock crossing. Local, loading and emergency access will be allowed.

No parking will be allowed along the east side of northbound The Embarcadero while the bike facility is in place. There will be signs to alert drivers of the lane closure.

The SFMTA recommends motorists travelling northbound in the vicinity of The Embarcadero to allow plenty of travel time and to use Sansome Street or Kearny Street as alternate routes. For details of traffic re-route, please refer to the attached America’s Cup Embarcadero Alternate Route Map.

The SFMTA advises motorists of the increased congestion in San Francisco and advises commuters to use transit on these dates.

As a reminder to fans and other motorists, the SFMTA will close eastbound King Street between 3rd and 2nd streets beginning in the 7th inning of all Giants home games until the post-game traffic has died down. Drivers on northbound I-280 should avoid taking the King Street exit during this period and use the Sixth Street exit instead. A map showing alternate post-game routes from AT&T parking lots is available on the Giants’ website.

The following street closures will be required from 3 a.m. to 8 p.m.

The 71 Haight-Noriega Muni route will be affected.

Muni will continue to provide supplemental transportation services to welcome the America’s Cup sailing fans and to keep the city moving:

Event participants can also go safely to the races at Pier 27 by bike. A separated bicycle facility will be in place along northbound of The Embarcadero between Washington Street and Pier 23 between this Sunday and next Sunday, September 15. Bicycle valet parking will be available inside Pier 23. In addition, painted green bike lanes are in place along The Embarcadero from North Point to Howard streets in both directions.

The SFMTA will provide additional bus service on the F Market & Wharves Line before and after each event:

49ers Football Game
On Sunday, the San Francisco 49ers will open the regular season by hosting the Green Bay Packers starting at 1:25 p.m. at Candlestick Park.

NEW NFL Bag Policy: Fans should be advised that there is a new NFL Bag Policy in effect at 49ers games. Only NFL-approved bags will be permitted inside Candlestick Park. For more information, please visit www.49ers.com/stadium/prohibited-items.html.

On game days, Muni offers several ways to get to Candlestick Park from locations throughout San Francisco. There are four Muni Express routes and two Shuttles.

All service, including the express service, is regular fare service, $2 adult per trip and $.75 for youth/senior/disabled per trip.

For faster boarding, customers are encouraged to buy their fare prior to boarding the express service. Clipper cards with either a Fast Pass or pre-loaded cash can be purchased at your convenience. Customers can load their cards online at www.clippercard.com (please allow at least five days for processing), or at one of the participating Clipper vendors or ticket vending machines in a Muni Metro station. Please go to www.sfmta.com for fare details.

On game days, Muni customers may purchase their fare in advance. SFMTA staff will sell one-way and roundtrip Muni fares from 2 to 5 p.m. at the following locations:

79X Candlestick Express Re-route
As of last year, the southbound 79X, which provides express service to the 49ers game from downtown, will be re-routed due to Central Subway construction on Stockton and 4th streets. Customers traveling to the game can board the 79X Candlestick Express at the following locations: